When we travel (which we are inclined to do when Fort Bragg starts to feel too small), people often ask where we’re from. Maybe because our suitcases are yard trash bags sealed with duct tape?

“Is your husband in the military?”

This is such a common response that we always chuckle. “No—that’s the other Fort Bragg, the one in North Carolina.”

(Now that I think about it, how come no one asks if I’m in the military? I used to shoot a gun. I’d be shooting to this day if Gary hadn’t confiscated my bullets.)

Our standard answer: “Fort Bragg is about 125 miles due north of San Francisco. It sits on the ocean half way between San Francisco and the Oregon border.” 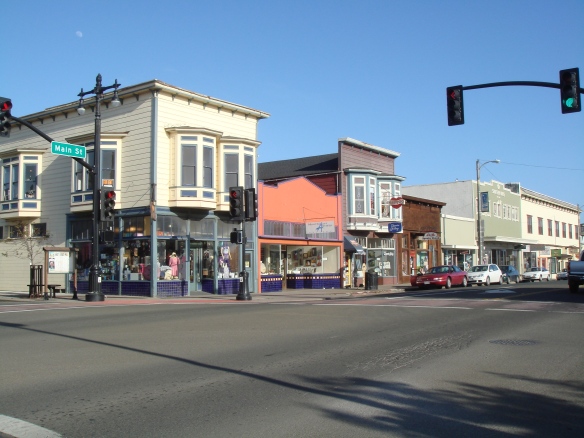 Eyes squint and noses wrinkle. Geography is not most people’s strong suit.

“Have you heard of the town of Mendocino?”

Fort Bragg residents are bitter that people know the town of Mendocino (11 miles to the south) yet constantly confuse us with a facility that perpetuates the military industrial complex.

Our audience starts to fidget. They hadn’t expected a history lesson.

“Acres of redwood forest and miles of rugged coastline make Mendocino County one of the most beautiful places on earth. Fort Bragg is the county’s largest seaside town with a population of about 7,000.”

At this point, we’re talking to ourselves and security has been called.

This statistic may lead one to believe there’s a pot garden in the backyard of two out of three homes. Not true. Of our four immediate neighbors, only one grows pot.

Just kidding! I’ve lived here since 1992 and have only met a few pot growers.

The fact that the marijuana business is such a large percentage of our economy indicates that we’ve lost a lot of industry over the years (primarily logging and fishing). To sustain a flow of legitimate tax revenue, Mendocino County must increasingly depend upon the kindness of strangers (otherwise known as tourists).

I encourage you to turn into a tourist and visit this beautiful place. While you’re at it, spend wads of money. And don’t leave before buying something at The Purity.