“Why of course I know Bryna Turner,” I say to anyone who mentions her name, shamelessly basking in the cast off glow of her newfound celebrity. Her play, “Bull in a China Shop,” recently completed a nine-week run at Lincoln Center in New York City.

Gloria Steinem attended one of the performances.

“I wrote the play as part of a writer’s group with a very small and scrappy downtown theatre company called Clubbed Thumb,” Bryna said. “As a sort of graduation present from the year-long group, the theatre offered each of us a reading of one of our plays in their space—at two in the afternoon on a Thursday. The director of my reading, Ellie Sachs, had been an intern for the director Evan Cabnet at a summer theatre festival, and invited him to attend. He wasn’t able to, but asked her to send him the script.

“Three days later, he called, introduced himself as the artistic director of LCT3 [the new artists’ wing of Lincoln Center], and said he wanted to produce my play! ‘What do you think about that?’ he said. I said, ‘I think that’s crazy.’ It’s the sort of phone call you don’t dare dream of as a young playwright.”

I met Bryna in the spring of 1993 at a children’s fair on Franklin Street. She was three years old. Her brother Packie (five) and my daughter Laine (four) were preschool chums. I didn’t know Packie, but could tell Laine was smitten by the way her face lit up whenever she spoke of their interactions at school.

Shortly after arriving at the fair and before I could extricate her from the stroller, Laine kicked her feet and shouted, “Packie! Packie!”

Like a scene from a romance novel, the five-year-old equivalent of Fabio with a halo of wispy blonde curls strolled through the crowd. As he drew near, Laine’s smile widened, cheeks reddened, her eyes sparkled. Packie returned her smile. He reached out and patted her head.

Laine ripped the bonds of her seat belt and jumped out of the stroller. Packie gave her a hug. His mother Anne appeared, holding the hand of a little girl with piercing blue eyes and fierce red curls cascading down her back—Bryna Turner, future acclaimed playwright. 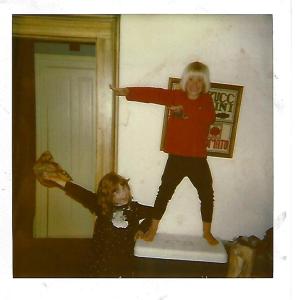 Regular play dates ensued, alternating between the Turner house and ours. It didn’t take Packie long to abandoned them for the rough and tumble company of boys.

The girls established fairly strict guidelines for playtime and generally got along swimmingly. Anne called them the “Little Biddies.” For the most part, each had an appealing, accommodating personality. As the youngest in their families, they’d learned to bury their desires for the greater good. Together, they were equals, and each could insist upon getting their own way—as long as it fit into the rules.

Occasionally, one of them violated a rule. The quarrel that followed was akin to alley cats fighting. No claws sank into flesh, but the yowling and screeching were disturbing. During these times, they were separated. No mediation from the mothers could manage a détente.

Despite sporadic battles, Bryna and Laine enjoyed each other. Their similar temperaments allowed for raucous good fun within the boundaries of civilized behavior, and created a friendship spanning 24 years. When we heard that one of Bryna’s plays was being produced at Lincoln Center, Laine and I couldn’t wait to fly across the country to see it.

In the fall of 2008, Bryna left Fort Bragg to attend Mount Holyoke in western Massachusetts where she earned a BA in Theater. She went on to obtain an MFA from Rutgers in New Jersey. At the tender age of (almost) 27, she’s written six plays. She lives in Brooklyn where Laine and I met her and their long-time friend Britt Calder for lunch. Afterward, we walked around the area, Bryna and Britt touring us through a neighborhood where mature trees break up the concrete landscape. Raised among the Northern California redwoods, they have a special appreciation for trees. 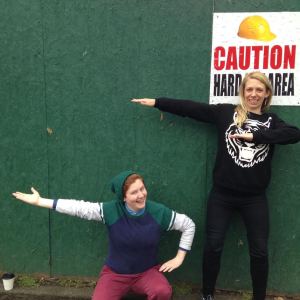 We parted with hugs, disappointed we wouldn’t see Bryna at the play that evening. In the first few weeks of the run, she’d hide in the back of the theater, near the light board, and spy on the audience. It was nerve-wracking to anticipate their reaction. Would they laugh at the right moments? Were they paying attention or were some reading their programs? Overall, the response was positive. Still, she found it stressful to watch her work being performed. She’d wait for the closing show to see it again.

“Bull in a China Shop” explores the relationship between Mary Woolley, President of Mount Holyoke College, and her lover, the writer Jeannette Marks which began in the early part of the twentieth century. The play covers 40 years amid the backdrop of women’s suffrage. It is nothing short of genius how Bryna captures the intensity of their coupling, much of it with humor, and all within 85 minutes.

At the end of the performance, Laine and I stayed in our seats for a few minutes, overcome by the brilliance we had witnessed. “My friend wrote this,” Laine said, her eyes filling with tears. “I’m so in awe of her.”

The precision with which Bryna partook in childhood games is evident in this play, which was described in a glowing review by the New York Times as “pugnacious, tender and gloriously funny….” We were thrilled to witness the success of a gifted artist who is also a highly intelligent and compassionate human being.

This is just the beginning of Bryna’s bright career. LCT3 is paying her a commission to write her next play. In June, there will be a reading of her play “Carlo at the Wedding” at the Abingdon Theatre in New York City.

I am honored to know Bryna Turner. I hope she forgives me for dropping her name from time to time. 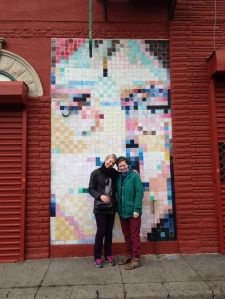