There’s a large segment of Mendocino Coast residents who have roots that go back several generations to a time when harvesting game from the countryside and fish from the sea was necessary for survival. Even today, the ability to hunt and fish goes beyond recreation—it continues to be an economic necessity for many families. These practices are also part of a deep tradition that honors family legacies as they are carried forward to future generations. 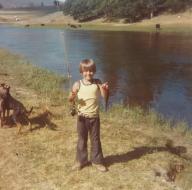 One of my favorite home-grown local boys is 42-year old Erik Filosi who grew up with a sportsman father and grandfather. He once told me, “I can’t remember the first time I went hunting or fishing. I’ve been doing these things all of my life. I do remember catching my first limit of steelhead when I was 10 years old.”

Erik has many hunting and fishing stories. Recently, he told me about one of his more frustrating deer hunting adventures.

On an early Sunday afternoon in mid-September Erik and his friend Justin decided to end their weekend trip. The buck Justin had shot earlier in the day was in the bed of the pickup. Hunting buddies since they were kids, Justin was reluctant to leave until Erik bagged a deer. As Justin drove the winding mountain road, he scanned the sparse woods and spotted a buck and doe standing along the tree line about 400 yards from the road. He pulled over, stopped the truck, and grabbed his binoculars to spot the buck.

Erik got out of the truck and stood behind the open door. With his rifle in his left hand, he put the barrel through the open window, resting it on his right hand. The buck stood broadside with the doe in front. He waited for the doe to move, aimed at the buck’s head and took his shot. As the bullet whizzed past, the buck looked around. The doe began to walk away. Erik fired another shot and hit the buck behind the ribcage. Both deer vanished into the bush.

After three hours of tracking, the light began to fade and Erik worried they would not be able to find the buck. They lost the blood trail a couple of times, but managed to pick it up again. The trail ended at a 40-foot ravine where they found the dead buck. Erik crawled down, hoisted it over his shoulders, and hauled it back to the truck.

“He was pretty small, but legal. He looked like my fox terrier with antlers.” Erik laughs. “But I’m glad I got my deer.”

There is a sparkle in Erik’s eyes as he tells the story, a glow that belies the fact that he is legally blind.

Growing up, Erik cultivated many friends who shared his passion for the outdoors. They also shared a passion for drinking beer and having fun.

One rainy winter night when he was 19 years old, he and a group of friends drove to McKerricker State Park, an oceanfront preserve about five miles north of town. They came upon a parked truck where they discovered the girlfriend of one member of the group with another guy. The driver of the truck sped out of the parking lot.

The Bronco driven by Erik’s friend followed the truck at speeds of 70-80 miles per hour along the narrow roadway leading out of the park and across Highway One. Neither vehicle slowed at the stop sign. The truck made it through the intersection.

The Bronco was hit broadside by a car heading north along the highway. Everyone was thrown from the SUV. It rolled three times before coming to rest on top of Erik.

He remembers nothing of the accident, but was told later that after the Bronco was lifted off of him, he had only a cut on his right hand and another on the back of his head. One friend had a minor back injury, another broke a shoulder, and one suffered a head injury. The driver of the car was unharmed.

Erik’s mother says when she got to the hospital that night, he appeared fine. He was talking and his only complaint was of a backache. Within a few hours, doctors discovered he had punctured a lung. Days later, they found a broken jaw.

Erik remembers waking up in the hospital and finding everything jet black. He heard his grandpa talking and asked him to turn on the lights. He heard his grandpa start to cry. Erik’s mom took Erik’s hand and told him that a blood clot had choked off the vision center in his brain. He was blind.

He squeezed her hand and said, “All right, let’s do it.” He was willing to do whatever he needed to resume a normal life.

Erik spent a month in the hospital. While there, he began to regain bits of his sight.

“Lying on my back, I saw little holes, tiny dots. I moved my eyes around and realized it was the ceiling.”

He reported this to his neurologist with excitement. The doctor said he imagined blinking lights and accused Erik of not accepting his blindness.

“This made me really mad. My Uncle Curt sat across the room and I said to him, ‘You’re wearing a hat that says Point Arena Rod and Gun Club.’ I swear that doctor’s jaw hit the floor.”

The desire to prove people wrong would serve Erik well in the years to come.

5 thoughts on “Shooting Blind – Part I”