It’s not often that two people get into a fight over a giant bra ball. In fact, my research suggests it’s happened only once in the history of mankind.

The kerfuffle started in the mid-1990’s when San Francisco Bay Area artist Ron Nicolino began collecting bras for “Bras Across the Grand Canyon,” a performance art piece to condemn sexism. Alas, the feds would not approve the venture, and he was left with tens of thousands of bras that had been donated by women from all over the world. 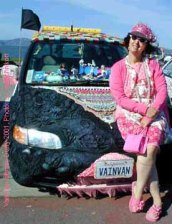 He took his plight to the San Francisco Chronicle, which published his desire to donate the bras to a worthy cause. Emily Duffy, another Bay Area artist, answered the call and offered to take a few hundred. She would use them to make a car bra for her “Vain Van.” But Nicolino wasn’t interested in giving away just a few—he wanted to unload his entire inventory.

I know what you’re thinking—right there should have been a sign that trouble was on the horizon.

Later, Duffy claimed that during their initial phone conversation, it was her idea to create a Giant Bra Ball. Nicolino claimed the idea was his. After all, most of his bras were already wrapped around a giant spool. A spool is a ball-like form, right?

Nicolino apparently didn’t get any warm fuzzies during his conversation with Duffy or from her subsequent letter where she proposed they collaborate on making a ball. He started rolling his bras toot-sweet.

At the time, Duffy had only 10 bras. How could she possibly compete with his collection of 20-60,000? (The estimates vary widely.) I’m thinking—but do not know—that Nicolino grossly misjudged her tenacity. Within weeks, she emailed a bunch of friends and quickly procured 15,000 bras.

The Giant Bra Ball War was on!

They each retained a lawyer. From that moment on, they never referred to each other by name. Duffy called Nicolino “the other artist” and he called her “the individual.” Duffy’s lawyer sent a cease and desist letter. Nicolino’s lawyer fired back a claim that a copyright cannot be held on a concept of sculpture.

I don’t know about Emily Duffy, but I do know that Nicolino hauled his Giant Bra Ball to the Mendocino 4th of July Parade in 2001. At the time I was still adjusting—after nine years—to living on the Mendocino Coast and was shocked by the number of women who reached inside their shirts to unhinge their bras and toss them onto the back of the flatbed towed behind his 1963 pink Cadillac. I would later regret not having been brave enough to rip off my bra to donate to the 14,000 or so hooked together to form the five-foot diameter ball. 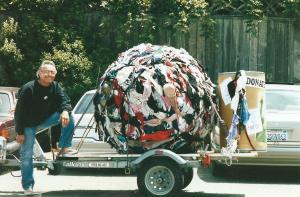 When I happened upon Nicolino after the parade, he gallantly posed for a picture with his creation. (His smile was tempting, but I retained my bra.)

For some years—although I am unable to determine how many—Nicolino towed his Giant Bra Ball in parades and parked it outside the Pier 23 Café in San Francisco.

Nicolino died on July 7, 2009 at the age of 69, three weeks after being diagnosed with cancer. A few years previously, he’d moved to La Conner, Washington, and started a casket-making business. At the time of his death, he was working on his own casket, which featured a clown face. An artist friend finished it for him.

After he died, his mother hoped that some organization would take the 1,600-pound bra ball.

Alas, in all my research and email inquiries to strangers, I am unable to find out what happened to Nicolino’s Giant Bra Ball. Duffy’s ended up in the American Visionary Art Museum in Baltimore, Maryland.

It’s unclear whether Nicolino took his Giant Bra Ball with him to La Conner. Given his mother’s wish that someone take possession of it, I imagine the ball stayed—like my son’s international Starbucks mug collection—in her garage.

4 thoughts on “A Ballsy Idea”