It’s the end of the workday and I’m thinking ahead to tomorrow. I remember drinking the last of the almond milk with my morning snack. 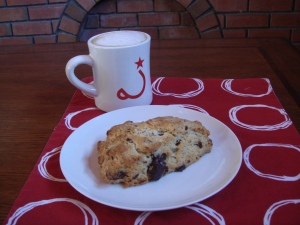 I hate to admit shortcomings, but confess I have some quirky rituals surrounding food. For example, I must have a latte and a treat around ten o’clock each workday morning or I get more than a little fussy.

Another food ritual involves the refrigerator. It must contain only the bare necessities. I become disturbed when it gets packed during the holidays or when we have visiting guests. The requirement to eat all that food is overwhelming. I feel the need to quickly rotate food in and out like a cafeteria vending machine. My comfort zone lies in seeing the glow of the light bulb through the empty spaces of glass shelves.

So I’m out of almond milk and won’t have time to buy any in the morning to prevent a guaranteed no-latte-meltdown at ten. 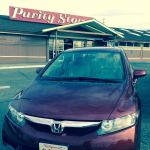 Time to hit The Purity.

The almond and other faux milks are located opposite the entrance on the far wall of the store. It’s five pm with a rush of people who need to replenish their cache of bread, cereal, and beer.

As I leave the car, I brace myself to navigate the obstacle course of dawdling old people, candy-begging children, short-tempered mothers, and itchy alcoholics.

Just inside the entrance I encounter a man standing behind a card table wedged between the doors and a refrigerator case.

Hark! What is this?

My first thought is that he’s a petition signature gatherer. In Fort Bragg, there are always controversial issues that spur people to erect tables and ask for your autograph.

But this guy is offering samples of soup. In 22 years of being a Purity patron, I’ve never encountered a food tasting.

His name is Dan and he owns Mendocino Soups. As I toss back a shot of Thai Fish Stew, he explains that each variety is gluten free and made from organic ingredients. It’s super yummy. I grab a quart jar from his table and head for the almond milk.

After going through the checkout line, I walk towards the door. A scruffy-looking young fella wearing a black hoodie topped by a worn jean jacket and draped with an impressive number of heavy metal chains enters the store. Trailing behind is a mid-size black pit bull mix.

The fella pauses to give Dan an inquisitive look. Dan offers a sample which is declined as the fella moves past. Dan then says, “I don’t think your dog is allowed in the store.”

By this time the fella is about five feet away, heading towards Beer Corner. He turns his head, cocks it slightly, and narrows his eyes with a look of you’re not the boss of me. “I know the owners,” he says and continues on, the dog by his side.

Dan chuckles and shakes his head.