My family often accuses me of being a control freak. This makes me feel bad. Not because it’s true, but because I’m obviously a failure at controlling their thoughts.

Recently, my husband Gary and I planned a large party to celebrate the engagement of our son Harrison and his fiancé Kasi. It wasn’t enough just to plan the party. Oh no. I decided to also embark on an ambitious landscape and patio project. 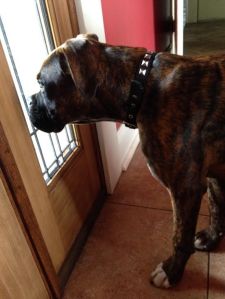 A few weeks before the event, Harrison called to ask if Gabe (a puppy belonging to Kasi’s sister) could stay with us while they were in town. “Sure,” I said. He and our dog Lucy would have fun together. The following morning, I woke at zero dark thirty in a panic. I had visions of the puppy and Lucy racing around the new landscaping, ripping it to shreds and ruining everything. No, no, no, Gabe could not come.

I sent Harrison a text telling him to have Kasi’s sister make other arrangements for her dog. He called to negotiate, and offered to erect a temporary fence around the new landscaping. I told him that determined dogs can easily knock over such a thing. He said Kasi’s family looked forward to being able to enjoy Gabe and Lucy.

I fancy myself as easy going and cool. I hate it when I’m revealed as uptight and neurotic.

“Okay.” Sigh. “Gabe can come, but the dogs will not be allowed outside unless one or both are on a leash. And I will not be responsible for supervising them.” 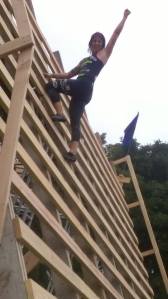 The only reason Bethany does Spartan races is because they allow her to climb tall things and yell Cheesecake!

The next day at the gym, I whined to my trainer Bethany and friend Kathleen: “I can see it now—the puppy and Lucy will tear around the house and break things. They’ll get out and destroy the yard. Even though I say I won’t get involved, I’ll end up supervising them.”

“Do you think you can work at giving up control?” Bethany asked.

I couldn’t imagine. Like base jumping, ice climbing and crewel embroidery, I’ve never tried it. (Sometimes I really don’t like Bethany.)

“Good,” Bethany smiled. “What will your reward be if you’re successful?”

“I think success will be reward enough, don’t you?” (I am such a perfect liar.)

“You’ve got to give yourself something, like nachos or cheesecake.”

Yum, I remembered the nacho challenge. The reward was delicious. I love cheesecake, but rarely eat it because I can consume vast quantities in one sitting. While thoroughly enjoyable, my stomach regrets it later. 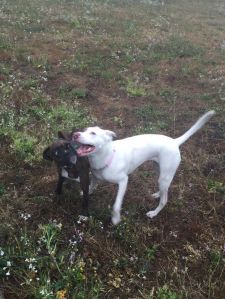 The following day, Gabe and Lucy met and became instant friends. Harrison and Kasi took them to the field behind our house and supervised while they ran and played.

Inside the house, their play was subdued and nothing got broken.

Whenever Gabe went to the door to signal he had to go outside to potty, I summoned Harrison. Not my dog, not my responsibility to take him outside.

When I discovered poop in the living room—Cheesecake! 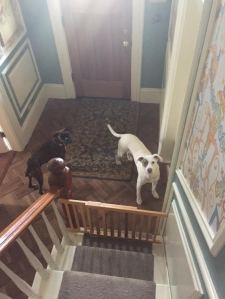 Puddles of pee in the hallway—Cheesecake!

When Kasi’s family arrived on Saturday and wanted to go to the beach, I declined because the party was a mere two hours away. Harrison put on his therapist tone and convinced me that everything was in order and we’d be back in plenty of time.

At the beach, I let Harrison run with Lucy while she jerked and tugged on the leash and went wild with delight.

The dogs were locked up during most of the party and when they emerged, Harrison and Kasi kept them on leashes.

Sunday morning, Kasi’s family came over for brunch. Harrison took the lead in preparing the meal.

Late Sunday afternoon, after everyone left, I sat in a chair on our new patio feeling proud. I’d spent two and a half days relinquishing control. At times it was difficult—like on our Coastal Trail walk when I wanted to take Lucy from Harrison and make her heel. But most of the time it was freeing.

I learned a valuable lesson: giving up control is a lot easier than wrestling for it.

On Monday, Kathleen and I went to lunch.