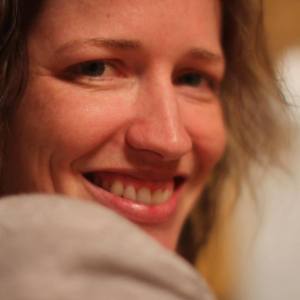 Hilary White is one of a handful of thirty-somethings who have returned to their hometown of Fort Bragg to run small businesses. Over the next few months, I hope to interview each of them and find out what motivated their return.

I met Hilary years ago when my daughter Laine was in high school and frequented her clothing consignment store, If the Shoe Fits. I was impressed by her gentle kindness and aura of professionalism. A few weeks ago, we sat down for a chat.

Hilary believes people deserve to feel good and surrounded by beauty. “These things bring value to our lives.” This belief lured her back to her hometown and keeps her here. It is also the basis of her business and the goal of her community advocacy. She and three other downtown business owners started the group Go Fort Bragg, which promotes progressive involvement in our town. “When people participate in their communities, it adds value to their lives.”

Go Fort Bragg encourages people with diverse opinions to attend city council meetings. Hilary claims that large audiences give council members opportunities to listen to citizens. She believes one of the values of democracy is that it allows people to express themselves and to hear differing opinions.

When asked to confirm or deny the rumor that she will run for Fort Bragg City Council in the next election, Hilary answered “No.”

“You won’t confirm or deny?”

“So you’re leaving it open to speculation.”

She laughed. “I will not run for city council in the next election.”

After graduating from Colorado College in 2002, Hilary came home to work for a few months at Out of This World in Mendocino. Her plan was to move to New York (where she would rent a room from friends and figure out what to do with her life). 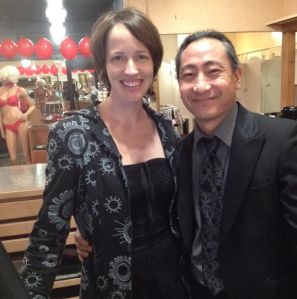 As fate would have it, she developed the hots for coworker Martin Nakatani. A romance blossomed and she abandoned her New York plans. They eventually married and settled in Fort Bragg.

Like many people along the Mendocino Coast, Hilary had to hold two or three jobs in order to make ends meet. In 2004, she began working at If the Shoe Fits. A mere three years later, she bought the business. 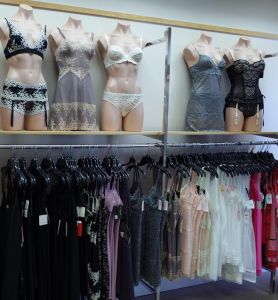 In 2012, she bought Understuff, an intimate apparel boutique. I wondered what prompted her to make a career in under garments. (Her answer wasn’t nearly as titillating as I’d hoped.) The owner of the store wanted to retire and encouraged Hilary to buy it. Hilary knew it was a viable business and didn’t want to see it close. After a few months, she sold If the Shoe Fits to Fort Bragg native Kerry Hagan and bought Understuff.

Over the years, Hilary has experimented with her inventory to include a variety of clothing—coats, jackets, pants, swim suits and practical pajamas. After the shop moved to Main Street, it gained more tourist traffic. “That’s been fun because it allows me to stock things that might not be affordable for the local market, but are beautiful for everyone to see.” 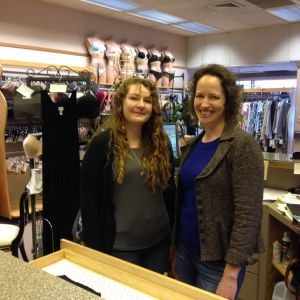 I tried to get Hilary to share funny stories about her customers, but she declined. Because of the nature of intimate apparel, she must be discreet. I find this reassuring. My brassiere preferences are stored in her computer. I hesitate to think of the stir this would cause should that information be leaked to the public.

Hilary is grateful that owning a business allows her to live in a place she loves. She appreciates being part of a community of downtown business owners who support each other. For example, when she relocated her store, Chriss Zaida of Toto Zaida was part of her moving crew. As Chriss prepares to move her store to Main Street later this month, Hilary and Martin have pitched in to help. 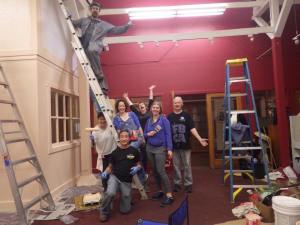 As a small business owner, Hilary has learned to adapt to changing conditions and trends. She feels the same holds true for the entire Fort Bragg community. “We don’t have to despair over what we once were [a thriving logging and fishing town] but we can make new things happen, like coastal trails and marine science centers. We can evolve while continuing to respect our heritage.”

Hilary is every bit as great as everyone says. On the surface, she exhibits a grace from a gentler era, dresses with panache, and has excellent posture. I’m happy to let you know that she’s also warm, vibrant, and generous with her laughter. Our town has benefited by her return.