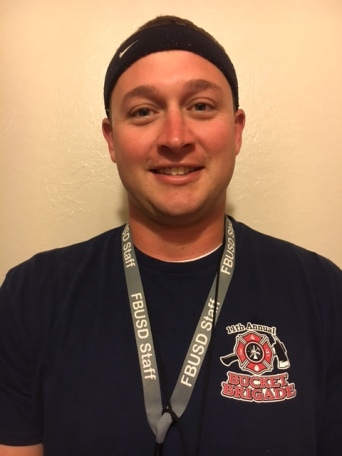 I’ve known Mark since he was a child, but don’t know him well. He had a good reputation, and I was always warmed by his delightful smile. Five years ago, when I heard he was hired to teach PE at Fort Bragg High School, I thought, “Oh, how nice—local boy goes away to gain education and experience and returns to share with his hometown.” Until I sat down to talk with him, I had no idea the deep level of dedication he brings to the youth of our community.

Mark grew up playing football and baseball, but he loves all sports. This makes him ideally suited to the many hats he wears at Fort Bragg High—PE teacher, athletic director and assistant football coach. “I’m so lucky to work in an environment where I can be myself, teach what I’m passionate about, and have fun.” The sparkle in his eyes grew brighter as he spoke. “I can’t believe I get paid for doing this.”

When this fourth generation Fort Bragg native graduated from high school in 2004, his present life was not on his radar. A star high school running back, Mark was recruited to play for Santa Rosa Junior College. A few years later, a shoulder injury permanently sidelined him. “Byron Craighead, the school’s head athletic trainer, taught me how to work as a student trainer with the baseball teams. I really liked it and started taking classes in kinesiology. I also took a couple of education classes, which sparked my interest in teaching.”

Mark went on to San Diego State and got a degree in kinesiology with an emphasis in physical education. He wanted to stay in San Diego and earn his teaching credential, but it was expensive and he needed a job. Lars Larson, his friend and former counselor at Fort Bragg High, told him about a local long-term substitute position. Mark could live with his parents, save some money, and figure out his next step.

The position was with the Lighthouse School—an alternative education high school. “It was an amazing experience,” Mark said. “Claire Hundley, the teacher on leave, is remarkable. We were in touch every day through email. The classroom was a revolving door of students going in and out of juvie. Claire taught me important lessons—these kids need support, love and a safe environment where they feel a sense of belonging. She helped me find that special something in each kid. I loved the job.”

Mark was not immediately comfortable with the return to his hometown. “I’d been away six years, living in cities and said I’d never come back, but I eventually embraced it. The stillness, calmness, the air feels different here—all of this allows me to breathe. My years away made me appreciate this as a special spot. Community support for our kids is incredible. Students and teachers don’t have to deal with big city problems.” He smiles when he adds, “I can also walk to work.” 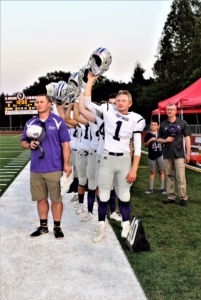 In 2011, Mark applied for and got the PE position. During the school year, Mark’s workday begins at six-thirty and often doesn’t end until eight at night. “I was the assistant baseball coach for four years. After that, I began assisting with football. Three years ago, I became the Athletic Director.”

There are 24 sports teams at Fort Bragg High. Over half the student body plays a sport. Mark assists with scheduling games and gym practice times. He helps monitor players’ grades, acts as a liaison between the school and parents, and handles complaints.

Mark also participates in the Assets Program, which offers after school weight training sessions once a week. Six years ago, he started a lunchtime intermural sports program that rotates between dodge ball, tennis, badminton, basketball and indoor soccer.

During the summer, he supervises the high school football players who run football camps for second through eighth graders and their coaches. “The high school kids are in charge and it’s great to watch them interact with the younger kids.”

Mark admits that teaching PE is a challenge. “Most kids view it negatively. It’s my job to find ways to allow them to enjoy it. I believe it’s important to be physically active—it brings about body awareness and builds confidence. I tell kids that the key is to a find form of activity that suits them. I try to make PE fun. I adhere to the basic curriculum, but sometimes I shake it up and we do things like have water balloon fights. Other times we go outside and walk around. I especially like walking the zero period [early morning] class so we can watch the sunrise.”

Mark is grateful to those who mentored him when he was new to the job, especially Becky Walker. “She was the high school principal when I started and is now the district superintendent. She was also one of my sixth grade teachers. Her obvious love of her job inspires me. I appreciate being in a district where the administration has created a safe environment for kids to develop together.”

One student in particular made a lasting impact on Mark. “He graduated in 2015 and was diagnosed with cancer,” Mark said. “It just wasn’t right– he was the most polite, caring, respectful kid. I stayed in touch with him and did what I could to boost his spirits.”

His cancer grew and he became wheelchair bound. Mark sent him a badminton racquet. “I told him to keep fighting and when he beat this we would play badminton just like we used to. Throughout his sickness, he was always positive and cheerful.”

Two years later, out of the hospital and back in Fort Bragg, Mark visited this young man. “As I listened to how he had died twice and his mother saved him, how he almost lost his hand to an infection, about chemotherapy, and physical therapy, I was blown away by the fact he had a smile on his face and was interested in how I was doing.”

During this visit, he handed Mark a bag. “Inside were a San Francisco Giants hat and baseball, both signed by Buster Posey, one of my favorite players. He met a lot of professional athletes during his time in the hospital and remembered I liked the Giants. His selfless act of kindness melted my heart. Here was a kid fighting for his life, and he thought of others. He taught me that we can all make a difference by our positive interactions with one another. Even the smallest gesture can mean so much to a person.”

This past summer, Mark married long-time girlfriend Jessica Alguinaldo. “We dated in high school. When I went away to college, she was starting her junior year, and it was hard to stay together. We broke up in 2005, but started dating again in 2010 when she graduated from Oregon State and moved back to Fort Bragg.” Jessica works as an audiologist for Audiology Associates. She runs their three offices—Mendocino, Santa Rosa and Mill Valley.

The one downside to their return is the lack of entertainment available for young people. “We have to be more proactive in seeking out things to do than when we lived in cities. Jessica and I have created a life that works for us. We hike, kayak, camp and hang out with friends. I don’t see us being as happy anywhere else.”

Our community is fortunate that Mark has brought his energy and passion home where he will have a positive impact on generations to come.