I rushed across the parking lot behind Taka’s Grill on Main Street, through the brisk autumn chill, into Pacific Healing Acupuncture. The warm, softly lit interior wrapped me in a cocoon of serenity so intoxicating that I was nearly too relaxed to get out of my chair after my 90-minute chat with owner Emily Head.

As a teenager, Emily had few aspirations outside of staying and working in Fort Bragg. Her parents, Marie and Lewey, had other ideas. They’d moved here from the Bay Area in 1977 and felt it important for their daughter to experience life outside this small community.

After graduating from high school in 1998, Emily agreed to go to Sonoma State but moved home after a year to figure out what path she wanted to take in life. For the next few years, she worked as a waitress and took classes at College of the Redwoods. She also got her esthetician and massage licenses. She worked briefly as a massage therapist, but found she didn’t enjoy it. “I was having wrist problems, and didn’t want to make that worse.”

A few years later, Emily realized she didn’t want to be a career waitress. She applied to her dream school—UC Santa Cruz—and got accepted in 2000.  She majored in sociology with a minor in psychology. “I thought I’d become a child counselor.”

After graduating in 2002, she entered an 11-month AmeriCorps program. “I wanted to start paying off my loans, and AmeriCorps offered money towards that. I also thought it would be a fun break from life—which it was. It gave me time to decide what I really wanted to do.” She became part of a team of ten people in Denver. “We traveled to a number of states where we did jobs like state park trail maintenance and renovating a playroom for a summer program that offered homeless children a place to learn, play and socialize.”

During her AmeriCorps experience, her mother suggested she chose a career in the healing arts, perhaps as an acupuncturist. “I’ve always been intrigued by natural healthcare and figured it was a great career for me to pursue. Growing up in a household that didn’t depend on doctors taught me what was available that didn’t include synthetic cures. I always looked to Mother Nature for healthcare and acupuncture seemed the follow that concept of staying healthy.

“I came back to Fort Bragg and took anatomy and other science classes at College of the Redwoods and Mendocino College, which helped get me into the Masters Program at Oregon College of Oriental Medicine in Portland.” She entered the school in 2006 where she attended daylong classes and practicum sessions five days a week. She loved living in Portland and studying traditional acupuncture. During the last two years, she also worked as an intern in various clinics.

She graduated in September 2009 with a Masters in Oriental Medicine and stayed for a couple of months to take three exams to earn her national acupuncture practitioner certificate before moving back to Fort Bragg. “I always knew I wanted to live and raise my future family here. My parents are here and I love the area.”

She once again worked as a waitress while studying for her California boards, which she passed in March 2010. Shortly afterward, she opened her business in the office complex behind Taka’s Grill. For the first few years, she supplemented her income by working three to four days a week at Lee’s Chinese. “Word of mouth has been a big factor in my growth. When I started accepting health insurance and Medi-Cal, my clientele also grew tremendously. I still work one day a week at Piaci’s. I love my profession, but like getting out and socializing. Waitressing does that for me.”

In addition to private sessions, Emily provides reduced priced drop in sessions on Tuesday and Wednesday evenings from 4:00-6:00 pm. Her fees for all sessions are based on a sliding scale given a patient’s ability to pay. Most treatments are covered by insurance. “Stress is a major component of illness,” she said. “I don’t want people to stress out over the cost of trying to get well.”

Emily is glad her parents encouraged her to leave her hometown and get a different perspective on life. “I learned I don’t want to live in a big city. I’m not a commuter. I don’t even like to drive to Mendocino.” She laughed.

She lives on the same property as her parents and shares a home with her partner Garrett Barker and his two children. “Garrett was born in Southern California, but lived in Fort Bragg off and on while he was growing up. He came back in his twenties and has been here ever since. He’s an amazing artist and also works for a machine shop in Comptche.”

“I grew up on the land where we still have a large garden. We raise rabbits, chickens, turkeys, and ducks. I raise a pig each year. I don’t do the killing of the larger animals, but I can butcher the meat. We also have beehives.”

Emily finds great satisfaction in helping people. “It sometimes amazes me that I can stick needles in people and it makes them better,” she said. “The body wants to heal and by using acupuncture, one can balance out the blockages caused by everyday life, including stress, injury, emotional upsets and illness.”

She’s sad that Fort Bragg doesn’t offer the same sense of community as when she was growing up. “I don’t see a lot kids riding bikes. I no longer know nearly everyone. I used to know the names of our homeless people. I don’t anymore. It’s especially hard for single people to live here—there aren’t many places to mingle.” However, she does admit that the Golden West Saloon—purchased a few years ago by a couple in her age group—has helped provide a social outlet for the younger crowd.

Emily laments the loss of the traditional workers who were once employed by the logging and fishing industries. “We’re more of a tourist community now.” She hopes more people who have left our community will return. “Many in my age group have already come back. It’s fun to hang out with people I went to high school with.”

Emily is pleased with the growth of Pacific Healing Acupuncture. Her ultimate goal is to establish a wellness center which would include a Naturopath, midwife, body workers and anyone devoted to alternative healthcare who is willing to help people regardless of their income. 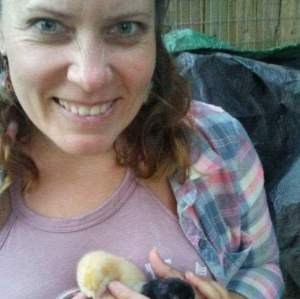