Sometimes the inspiration to move back to the place you love arrives in the most random of ways. An email sent by your wife, added to the hundreds you received that day, nearly lost until a couple weeks later when you find it and ask why she sent you a link to a house for sale in Fort Bragg. She knows how your long work days often spill into late nights and take a toll on your personal life. Since leaving the Mendocino Coast over 20 years ago, you’ve always said you’d move back. Maybe now is the time.

Thus began the journey of Jason Fruth and his wife Cate who uprooted their lives in the Silicon Valley to create a new, fulfilling one here.

Jason was born in Houston, Texas and moved to Elk with his mom Laurie Graham when he was seven years old. “My mom’s whole life was her children, but she was always willing to open her home to a friend in need. She loved nothing more than spending time with family and friends.”

He loved growing up in the tiny coastal enclave. “Through the fifth grade, I went to the Elk School which only had about 20 kids. My friends and I had the freedom to hike the bluffs, roam the beach and camp by the river. I couldn’t have asked for a better childhood. It shaped who I am. I didn’t realize how special it was until I went to college and met kids who went to school with 2,000 or more students.”

He graduated from the Mendocino Community High School in 1995. “I grew up in a working class family. I wasn’t college oriented, but my paternal grandparents in Texas insisted I go. I applied to San Francisco State, San Jose State and Cal Poly Pomona.” He was accepted by all, did some research, found Cal Poly Pomona was the most highly rated, and decided to go there. His grandparents and father paid for tuition and housing.

When asked to declare a major, he asked, “What’s a major?” He laughed at the memory. “I had no idea. I was fascinated by airplanes and watched the NASA channel a lot so decided on Aerospace Engineering.

“I’d never heard of Pomona. I’d been to Disneyland once when I was a kid. I packed my two huge stereo speakers into my old Mazda 626LX and stuffed the rest of my meager belongings around them. A friend from high school made the trip with me. When I dropped her off at the airport a week later, I broke down crying.”

Those were the days before cell phones, when a homesick kid had to pay for long distance calls if he wanted to talk to his mom. Jason didn’t have this luxury. He got an on-campus job as the audio visual tech manager at the student union. He eventually became the building manager.

In 1999, friends who were riding the dot-com wave encouraged him to join them in the Silicon Valley. He moved into an apartment in Palo Alto with Joseph Huckaby, a friend from Elk. “I got a job in tech support with Connectix. When I looked at my first paycheck, I thought, ‘Are you serious?’ I’d never made this much money at one time in my life.” After a year, he was promoted to quality assurance engineering. In 2000, the dot-com bust began and Jason survived numerous rounds of layoffs. The company was bought by Microsoft which laid off 90 percent of the employees. Jason remained.

At Microsoft, he spent two years as a quality assurance engineer. “We tested code for the Mac Business Unit—the unit that creates Word, Excel and PowerPoint.” He was promoted to lab manager where he remained for eight years before becoming a regional information technology (IT) manager—a job that required long hours. “I’d work all day and go home to spend hours answering emails. I was part of a global team and often on conference calls in the middle of the night.” 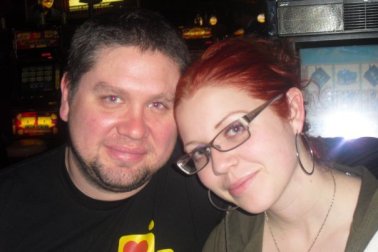 He bought a condo near San Jose State and rented out a bedroom, usually to a college student. “In 2009, a friend told me her friend Cate—who lived in Willits—was planning to go to San Jose City College and needed a place to stay. I rented her the room.” They began spending time together and slowly became a couple. They married in 2013.

Cate earned a degree in Anthropology from San Francisco State. She worked for a number of companies before becoming a business manager at Stryker, a medical technology company.

“My fourteen years with Microsoft was a good experience, but intense. It was a great company to work for in my twenties and thirties, but it kept me away from home.” Over time, he and Cate grew more stressed and less happy with living the city corporate life.

They hadn’t talked about moving until Cate emailed him that link to a house for sale in Fort Bragg. It turned out to be the catalyst that put in motion his desire to one day return to the coast.

Jason contacted a friend since middle school—Sage Statham—who had recently become the manager of Mendocino Community Network (MCN). There were no openings at MCN, but this didn’t deter Jason and Cate’s decision to move. “I called my sister and asked if we could live with her and her husband until we got settled. She was thrilled.

“We moved in late 2016. A month later, Sage called to say a guy at MCN had decided to retire. He encouraged me to apply for the job of field technician and I got it.”

The house Cate found on the internet was still on the market. They made an offer, but the deal fell through. They looked at many others, but none appealed to them. Three months later, they made the same offer on the original house and it was accepted.

“Cate and I kept going back to this house because it was newer, well-constructed, in town, with city utilities. It had a serendipitous feeling given that it popped up so randomly in our lives. It was meant to be.”

As he settles in to his new life, Jason contemplates how he might become involved with his community. Growing up, he attended Camp Rubber Soul, which brought groups of able-bodied and disabled kids together for a week at a time in an effort to foster understanding between the two. “It gave me an appreciation for not judging people.” By age 11, he became a camp counselor. “I used all my vacation time to return each summer until I was 28 when the camp shut down due to lack of funding. I’d love to see something like that again.”

Jason enjoys his job at MCN, which is far different from what he did before. “There’s a nice mix of being out in the field to fix problems and doing office work. At the end of the day, I leave it behind and go home to spend time with my wife and play fetch with our dog Cassie. It’s a pretty good gig.”