I can hardly believe I’ve lived in Fort Bragg long enough to miss something that used to be. But then things tend to come and go over the course of 20 years. One of the things I miss is how a group of old Italian men used to gather outside The Purity. I once stopped and chatted with them.

I was told there are two things rarer than hen’s teeth for a retired Italian guy in Fort Bragg—dodging the wife’s honey-do’s and a warm sunny day. When he’s able to bring the two together, he’s off to The Purity. The wife can’t understand why he needs to get together with his buddies. “Didn’t you have enough of them when you worked at the mill?” He might have been happy to leave the job behind, but not the guys. It didn’t take long to start missing the guys.

Staying home can get lonely. When the weather’s good and the wives backs are turned, they sneak out of the house and congregate at The Purity. They talk about old times, but mostly they wait to see if something exciting will happen.

One day, sitting in my car as Gary shopped, I saw one of the old the guys walk up to stand along the south wall. Another arrived and then another and another, until the gang was there. They spoke Italian, laughed at jokes, and eyed women walking by. 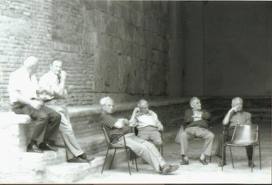 A younger man walked around the corner with his dog. He wasn’t a member of the group, but they knew his name. They shouted, “Hey Bill, how you doing?” Bill wasn’t too swift. He was mentally slow and fat, a combination that made it hard for him to get around.

One of the guys said, “You should enter that mutt in the Ugly Dog Contest at the Paul Bunyan Days. You’d be sure winners in the owner-dog lookalike category.”

Bill shared the rheumy eyes, tottering gait and dirty blonde hair of the old, tired cocker spaniel. He laughed even though it looked like he didn’t get the joke.

“All that dog needs is a pair of glasses and you wouldn’t be able to tell the difference between you.”

Bill tied the dog’s leash to a pillar outside The Purity doors. It wasn’t really a leash, but a frayed rope. “Will you guys watch my dog?”

Bill disappeared into the store and the dog started to yelp like someone was beating it with a stick.

The dog announced that it wasn’t okay. His yelps turned into ear-piercing howls.

“Maybe I should we take him for a walk.” One guy untied the rope and tried to coax the dog out of his sitting position. The dog refused. His howls turned to screams.

A few minutes later, Bill came out of the store and the dog stopped crying.

“We tried everything. Damn dog wouldn’t shut up.”

“Don’t ever leave him with us again.”

Bill said nothing, just looked confused. One guy handed him the rope. Bill and his little dog tottered down the street.

The guys agreed it was time to go home. Bill and his dog were enough excitement for the day.