In the past couple of months, I’ve initiated a special weekend event with Wilson called the Homeless Dog Walk. I often see homeless people with well-behaved dogs heeling at their sides without a leash. For years, I’ve been envious of this feat. While I have been successful in training dogs to heel, I’ve never managed to do so without a tether.

I figured that after 14 years and 5,000 miles, Wilson can behave himself off leash for at least 10 minutes. (I bring along a leash in case he ignores me and wanders off.) The first few times, he was nervous— hesitant to leave the yard and turning back home as we ventured down the alley behind our house.

He now looks forward to this taste of freedom. He also maintains a fairly consistent heel. When he starts to wander a few feet away, I simply touch his back to get his attention. I don’t yell because he’s mostly deaf and I don’t want people to think I’m a dog abuser.

The Homeless Dog Walk meanders around the back streets of the neighborhood. This area is so quiet that street hockey teams could play all day with little vehicular interruption.

Cesar Millan, The Dog Whisperer, says “The walk should be like prayer.” And so it is with the Homeless Dog Walk. I savor each one, knowing it could be the last in the life Wilson and I have shared.

This past Sunday, we got to the end of the alley to find a neighbor trimming a bush inside his fenced yard. Wilson heard the snap of the hedge shears and drifted across the street toward the sound. I trotted after and herded him onto the sidewalk.

(Fun fact: this particular man has lived here about five years. Each time I see him, I smile and say hello. Each time he looks straight at me and turns away. Fortunately I don’t see him that often, but when I do, I continue to smile and say “Hey.” Perhaps he finds this torture. I enjoy torturing him with neighborly cheer.)

Mr. Neighbor said, “Looks like he could use a leash.”

I was pleased that after all these years, he finally acknowledged me. My friendliness had broken him down.

I smiled brightly and chuckled. “He’s 14 and I take him out a couple of times a week for a few minutes. It’s his little treat.”

Mr. Neighbor did not return my smile. “There’s a leash law. You need to put him on a leash.”

“THE LEASH LAW APPLIES TO EVERYONE!” He turned a dark tomato red and sprouted black horns.

I put the leash on Wilson. “I’m sorry. I didn’t mean to offend you.”

And then he said in a tone conjured by 13-year old girls when speaking to their mothers, “It’s a good thing you’re so special.” The word special was said with such heat that I swear he blistered his tongue.

I was stunned. I wanted to—let’s just say the hair on top of my head burst into flames and a number of acts of physical violence flashed through my mind.

The sharp blades of his hedge shears glinted in the late afternoon sun. Staring me down with his raging eyes, he clapped them shut and pointed them at me.

I locked eyes with the insane.

Regular readers will know I’m capable of running, but my poor old dog is not. I don’t normally take my pepper spray or shotgun on these walks. And God forbid I’d have my cell phone.

I dropped my eyes, turned away, and slowly led Wilson up the street—all the while keeping my ears alert for the click of a gate latch and the soundtrack from the Psycho shower scene.

I engaged in deep breathing exercises (good juju in, bad juju out) until my hands stopped shaking. A block away, I removed Wilson’s leash. I refused to allow this Napoleonic man to ruin our sweet walk.

Maybe Mr. Psycho is the Neighborhood Watch Captain or self-proclaimed Dictator of the Hood. Kudos to him for keeping the area safe from jaywalkers, sidewalk bicycle riders, and mid-century women taking their geriatric dogs on short walks without a leash.

I sleep better at night knowing he’s on the job. 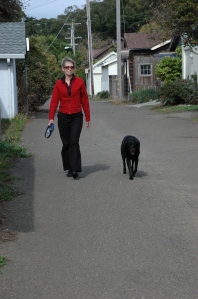