On Earth Day 1971, I was a junior in high school. My sister (a sophomore) and I decided to honor the day by walking instead of driving the five miles to school. We stopped for three cigarette breaks and once to smoke a joint. At the end of the day, we walked eight blocks, decided the trek home would be too arduous, and stuck out our thumbs to hitch a ride. Our Spanish teacher picked us up and gave a lecture on the dangers of hitchhiking until he deposited us on the curb outside our house. We crept to the backyard to enjoy a smoke before going inside.

I smoked off and on for the next 30 years, entertaining myself during the off years with Dance Aerobics in the eighties and walking my dogs in the nineties. At the age of 50, my teenage son needed me to sign consent for him to join a gym. Before I knew it, I’d also signed up. I’ll admit I fell for the sales pitch of the family discount, but also hoped that exercise classes might help shed the 15 pounds menopause had piled on and make me feel less like a sausage packed into my clothing. 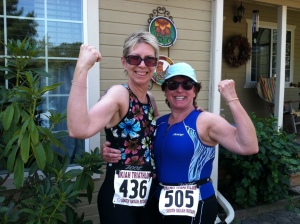 My friend Kathleen and I took classes, worked out on our own, and eventually, with a personal trainer. We grew stronger and, I dare say, a little cocky. Six years into this regimen, she suggested we do a triathlon. I agreed before I fully knew what it meant (or how to spell it)—a half-mile swim, 22-mile bike ride, and 5k run. We worked out six days a week, and created a motto: To finish is to win.

This race taught me: (1) I’m more physically capable than I think I am; and (2) I will never do it again (the open water swim was terrifying). But the experience was a tipping point—it made me yearn to challenge my body and expand my capabilities.

I started entering local 5k races. The year I turned 60, I won first place in my age category in two races—not because I’m fast, but because I was either the only woman in that category or the few others were a lot older. The year I turned 61, I ran five races, motivated by the fact that my friend Sandy would turn 60 the next year and she’s much faster than I am. That would be my last year to collect ribbons and medals. (I got four.) 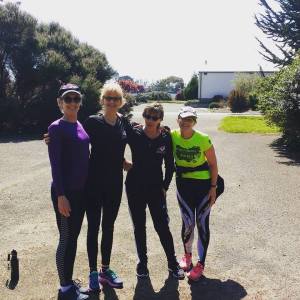 This past January, a group of fellow gym rats—Beth, Yvette, and Jan—invited me to join their Spartan team for the May race at AT&T Park. My personal trainer Bethany had done a number of these and always came back battered and bruised, but high on accomplishment. I watched a YouTube video and told the group, “What kind of crazy would do such a thing? I’m 62 years old for God’s sake. I work out four times a week and run 5k races. Leave me alone.”

They kept me on their email thread. A few weeks later, I asked Bethany if she thought, with proper training, I was capable of the challenge. “You could do it today,” she said.

Fear of failure and letting my teammates down became major motivators. I was two, eight, and thirteen years older than the other three members of my group. I pushed myself—strength training and running six times a week. I won’t lie, training wasn’t easy. For example, I’d never run more than 3.10 miles (5k) in my life. Each quarter mile beyond that was exhausting, but I kept at it until four, four and a half, and five miles wasn’t so bad. Six point two miles (10k) was—and still is—a bitch, but I know I can do it and I’ll do it again.

I grew stronger, but no matter how hard I trained, I was the slowest and weakest of the team. In many areas of my life, I’ve excelled or been at least average. It pissed me off that I’d slipped to the lower end of the bell curve. I tried to avoid bitterness and accept my weaknesses. I succeeded about a quarter of the time. Many days I wanted to quit, but kept going. It felt good to be part of a group working toward a common goal.

I had four months to obsess on the Spartan Race. Each time I thought about it, a bolt of fear struck my heart, ricochet down to my stomach, and left me feeling nauseated.

This held true until the morning of the race as my team and I watched young hard-bodied competitors rush through the course while we waited for our 9:30 start time. We’d arrived early to watch Bethany run the competitive race. (We weren’t considered competitors—we were “fun” runners.)

TUNE IN NEXT WEEK FOR PART II 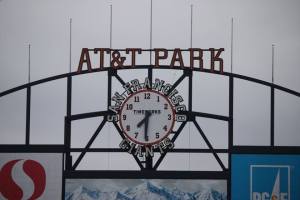 5 thoughts on “The Reluctant Spartan – Part I”