We moved to Fort Bragg 26 years ago when our children were very young. Our house is across the alley from Chapel by the Sea, the town’s only mortuary. It was the summer between kindergarten and first grade for our older child Harrison. He had no friends and a limited capacity to interact with his three-year old sister (and his parents). At the time, Larry Blair was a partner in the mortuary and lived in the upstairs apartment with his wife Shirley and teenage daughter Charla. Older daughter Charise was married to Nathan who worked for Larry. They lived in the alley apartment.

That summer, Nathan and another employee were often involved in outside work activities. While taking walks with the kids, we eventually got to know everyone on the other side of the alley. Convinced these were trustworthy people, my husband Gary and I consented to let Harrison hang out with the guys when they were outside. As the summer wore on, this happened a few hours each day. It also became a bargaining chip whenever Harrison misbehaved. “That’s it, buddy. You’re grounded.”

Imagine the deep sadness of a cherub-faced six-year old as he stood at our alley gate howling like a wounded hound dog, “Nathan, I can’t come over to the mortuary today. I’m grounded.”

At times, Charla graciously consented to tossing a baseball around with Harrison, honing throwing and catching skills that carried with him into Little League.

When Harrison discovered the casket room, he chose one for each member of our family. Older sister Jennifer recalls him describing hers as having pink satin lining and a white pillow. She felt honored. When his dad and I told him our plan was to be cremated, he scoffed and said, “Nobody wants to be buried anymore.”

From first through third grade, he aspired to become a mortician. However, he was conflicted. He also enjoyed ocean fishing and was enamored by our commercial fisherman friend Jared Williams. Whenever anyone asked, “What do you want to be when you grow up?” he’d reply, “A fishing mortician.” The inquirer flinched like someone splashed cold water in their face.

Over the years, our families socialized, celebrating birthdays and other events. But mostly, we visited across the alley, getting to know one another in a casual small town kind of way.

Eventually Larry and Shirley moved into their own home and later out of the area, but to this day Shirley calls me “Neighbor” whenever we meet. I have a deep and abiding affection for this lovely, kind woman.

Charise and Nathan divorced. She later married John Reynolds and they moved away. They had two children and returned to live in the mortuary alley apartment when Katelyn was nearly five and Jacob one and a half. This planted the seed of a deep, lifelong friendship where we shared many joys, including the birth of son Nick, and one major sorrow—John’s sudden death in 2010 when the children were 13, 10 and 7. Over the years, they moved to various places, but we remained close. Throughout it all, the looming red mortuary stood as a monument to these relationships.

I wasn’t paying attention to the time, but later learned it was about ten minutes to two o’clock. I walked by my kitchen window and glanced, as I often do, at the mortuary. A work crew had spent the morning installing new windows in the upstairs apartment. This was part of a lengthy renovation project to a space that hadn’t been updated since the eighties.

I saw a large puff of what I thought was mist coming from the open door. Within seconds, the mist turned dark grey. I hollered at Gary, “The mortuary’s on fire!” I grabbed the phone and rushed outside while dialing 911. It had already been reported.

A flurry of law enforcement arrived to cordon off the street. Neighbors gathered, some inside my fence, all of us sharing looks of horror and tears. We watched the smoke grow in volume and black intensity. I cried for it to stop. This stately building stood for over 100 years, the past 26 years as our neighbor. This couldn’t be happening—STOP!

The fire had other ideas.

Within minutes, huge flames erupted from the door. Seconds after that, the newly installed windows exploded with fireballs. Our amazing volunteer fire department arrived and set to work, spraying the building with thousands of gallons of water. I held hope they could contain it at the upper level.

The fire had other ideas.

The violence of a structure fire is terrifying to witness. Despite the copious amount of water sprayed with extreme velocity, the fire spread to the lower level, eventually forcing those windows to explode.

Within a few hours, our beautiful mortuary was in ruins. The freshly completed apartment renovations had gone up in smoke. Julie, the manager who had moved in two weeks previously, and her dog Pillie had been out of town for the day. She had anticipated returning to new, draft-free windows only to find she had lost virtually everything—most devastating were her two young cats, two canaries, and a fish. When she arrived, she stood next to her friend Amy, tears rolling down her cheeks. 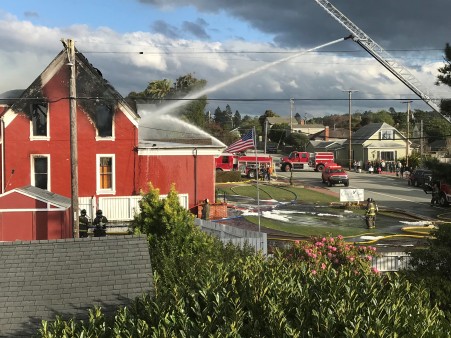 About 4:30pm, the fire department had contained the blaze and began wrapping up. I am in awe at how, despite the chaos of the fire, they maintained their professionalism and focus. Heavy hoses had been dragged about the property, yet they did not damage one plant of the major landscaping project that was completed this past fall. 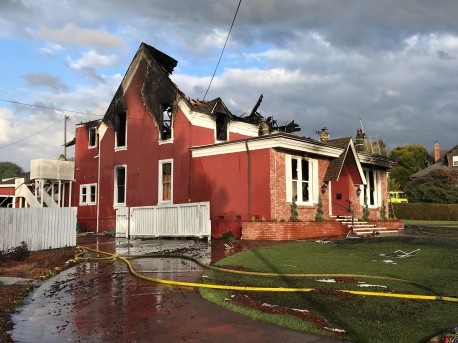 After a fitful night of little sleep, I rose the following morning worried about Julie. I didn’t want to, but couldn’t help, looking out our east windows to a sight I’ve always revered. It was horrible—a burnt out shell of a once stately building. My sadness runs deeper than I could ever have imagined. I can’t fathom how I’ll face this mutilated scar in the coming days and weeks.

For now, I try to find consolation in the fact that even though the monument is gone, the love it symbolized remains. Charise, Charla, Katelyn, Jacob, Nick, the Blairs and my family share a common grief, but we also share a special bond that will carry us through. 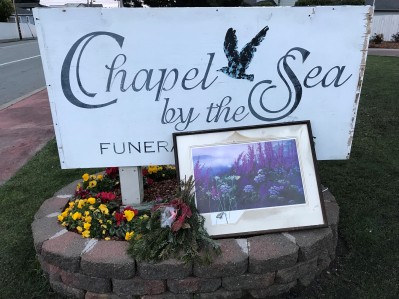 A Go Fund Me account has been set up for Julie who lost nearly everything in the fire:   https://www.gofundme.com/julie-and-pillie-start-again-fort-bragg-ca

To read about the most common causes of house fires and how to prevent them, go to:  https://www.realinsurance.com.au/home-insurance/home-safety/the-most-common-causes-of-house-fires

7 thoughts on “Death of a Mortuary”