Apparently many Scandinavians believe that by the time we die, the sum of our possessions should fit into a satchel. I suppose this makes disposal of our property easy for our kids—simply pick up the bag and toss it in the garbage. Being half Scandinavian, I suspect it’s really designed to make us feel guilty for accumulating stuff that makes us happy and comfortable. I was raised with the concept that it’s best to live a life of misery and deprivation.

I’m not planning to leave the planet any time soon, but after learning this I viewed my things differently. What is truly necessary to quality of life and what’s not? If I had to whittle away to the barest minimum, what would I get rid of? How long would it take? I’m a busy person and decided it would take way too long. I tried to banish the idea, but it haunted me.

I know I have too much stuff—things I don’t use, things that if occasionally needed could be borrowed. I finally devised a plan:

Break it down into small steps. Make it a game. Yay! I love games. Call it “Seven on Sundays.” Each Sunday, seven items or more can be tossed, but not less. If I got excited and went for more, the count couldn’t be carried over to the next Sunday. Make it an exercise in moderation. Place each week’s stash either in the garbage, recycle, or a box to haul to a thrift shop at the beginning of each month. By the end of the year, I’d have rid myself of at least 365 things.

My enthusiasm tempted me to go on a spree, but I knew such obsessiveness would quickly cause burnout and failure. I mostly forced myself to stop at seven.

It took two months to get out of the laundry/utility room! I was shocked to find three full bottles of Murphy’s Oil Soap within the dark recesses of the cupboard’s upper shelves. (I used to take pride in housekeeping and would pick up extra bottles when this was on sale.)

In my armoire, I found:

The following week, I determined it would take more than a month of Sundays to clean out the armoire. After the laundry room fiasco, I didn’t have that kind of time. So I modified the rules to seven minutes. I got rid of 24 things. Fifteen went immediately into the trash: socks without matches, panty hose with failed elastic bands and two half-slips bought in the early nineties (when was the last time I wore a dress?).

A week later, I braved the master bathroom. Makeup primer I’d purchased to enliven my aged face for my son’s wedding (two and a half years before) and never used since. Extra buttons that came with clothing purchases. Where was this clothing? Scraps of paper with reminder notes. Yes, apparently I once wrote reminder notes in the bathroom. (Go ahead, judge me. I’ve done worse.) A 10-year old pair of prescription glasses.

The last Sunday of January, giddy that the dismal month was coming to a close, I celebrated by getting rid of two pairs of expensive, yet uncomfortable, shoes. Toward the end of the day I realized I hadn’t completed my seven. I went to my closet—the perfect place for unused crap to hide. I spied an old gym bag—some swag from two decades ago. I debated over and shoveled five pairs of shoes inside it.

The most difficult pairs to part with were in the back—black velvet shoes with embroidered Christmas decorations—pumps and flats. For years, I wore these during the holiday season. I bought them at Mervyn’s in Santa Rosa shortly after we moved to Fort Bragg (25 years before). They were covered in dust. I felt the heartbreak of bygone Christmas seasons when my kids were little. I cried as I put them into the bag. Our possessions are only things, but some evoke memories that make grief a part of the removal process.

I won’t bore you with the details of what I tossed each week. There were weeks when I forgot until evening and went into a panic over finding seven. That was eased by throwing away things as simple as old pencils (Who uses pencils anymore? Certainly not Scandinavians!) and pens with dried up ink. And blurry photographs that don’t make sense to keep. And spices—we all have spices in our cupboards that are long past expiration dates.

If you’d asked me how many pairs of sunglasses I own, I’d have said two: a cheap-ass pair bought about 10 years ago and an expensive pair bought two years ago. Imagine my shock to open a cupboard door in my office and find SEVEN PAIRS OF SUNGLASSES!!!

The red framed pair are fashionable, but bulky and heavy. They’d been replaced with the cheap-ass pair. Don’t ask me why I couldn’t bear to part with them. When I started jogging seven years ago, I bought a pair of lightweight wraparound sunglasses that fogged up as I heated up. I’d bought a funky purple pair in Portland when I visited my son years ago. How could I possibly give those up? And so on…. Five went into a zip-lock bag for the thrift store. (The Portland funky and cheap ass pairs will have to wait for another day.)

One Sunday, I was mumbling curses as I scrubbed an old Pyrex glass casserole stained by years of use. It was so gross that I’d never show it to company. If I moved, I wouldn’t take it with me. If I died, my kids would throw it away. Gone!

A laminated map of San Francisco. How long have I had a smart phone to access for directions? At least six years. Gone!

Christmas decorations. I have many and love every single one except the bunch I don’t take out of the storage bins each year. For the first time, I questioned why I keep them. Perhaps it’s those blasted memories of bygone holidays, avoiding the grief that trashing might bring.

I was sad to give away the little grapevine wreaths I’d wrapped with ribbon and hung about the house when my kids were young. These had not seen the light of Christmas for years. Someone will find them festive and delightful. I cried as I put them in the donation box. 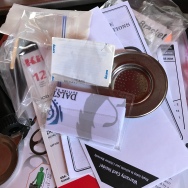 By the end of the year, I’d gotten rid of at least 500 things and don’t miss a single one. When I started this project, I had no idea what a relief it would be to get rid of stuff. More importantly, allowing myself do it systematically instead of manically, where I would quickly tire and give up.

I’m taking a brief hiatus, but will revive Seven on Sundays on March 3rd—a date arbitrarily set because it’s winter and right now my goal is to sleep as much as possible. Yes, there is more to toss, but I don’t aspire to get my possessions down to a satchel. After all, I’m only half Scandinavian. 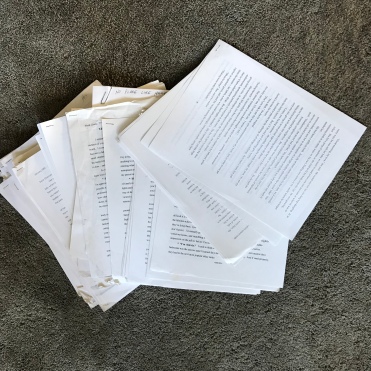 10 thoughts on “Seven on Sundays”