As I drove to interview Aaron Haye—production designer for Bohemian Rhapsody, one of 2018’s hottest movies of the year—I have to admit feeling a bit starstruck and nervous. This soon evaporated after we met at the Cookie Company and I sensed the commonality he shares with the many others I’ve interviewed—the easy openness of someone who grew up in a small town surrounded by a community who loved and nurtured him.

Aaron was born in Los Angeles in 1973. Some years before, his grandparents, a few uncles and an aunt had migrated north to Mendocino County. In 1975, Aaron’s parents loaded him and his baby sister into an old Chevy pickup and followed. Soon other friends and family joined them. “Growing up, I remember barn raisings and potlucks, families getting together. It seemed everyone had a baseball diamond or volleyball area on their property. They’d moved here from the city so they could build meaningful lives and land was cheap back then.”

Aaron speaks fondly of his childhood. “My friends and I spent hours in the woods and on the beach. We did what we called ‘schralping,’ where we’d follow a trail for a while and then veer off trail into the woods to explore. When we got older, we’d do the same thing in our cars, exploring back roads all around Northern California.”

He was interested in both art and science. “I loved being in nature and also loved to draw and take pictures.” He credits three teachers in particular for inspiring him in each—Rita Davies (fifth grade), Bill Brazil (high school art) and Robert Jamgochian (high school science) as well as the free-form learning of Bob Evans’ ROP Audio Lab at the Community School.

He graduated from Mendocino High School in 1991, and went to UC Santa Cruz. After two years of general science classes, he discovered a class in field biology where the instructor sent students to the beach to record elephant seal behavior. He loved it and decided to major in marine biology. The summer before his last year of college was spent on a remote island off Alaska where he observed, photographed, and drew Steller Sea Lions before completing his thesis on mating behavior of elephant seals at Año Nuevo Reserve in California.

So how does a kid who grew up on the Mendocino Coast and received a degree in marine biology go on to become the production designer for one of the biggest movies of 2018?

“My dad was a carpenter here on the coast and moved to Marin when I was a junior in high school. There he worked as a model builder for the visual effects company Industrial Light and Magic (Lucasfilm). When I was 16, I was hired to sweep floors in the model shop. After I graduated from college in 1995, I was considering a PhD program when ILM hired me as an assistant in the model shop.” After a year or two assisting in various departments he was promoted to model maker, building miniature sets for visual effect shots.

Those early days working in visual effects gave Aaron an opportunity to contribute to many films, including Star Wars Episode I and II, The Matrix 2 and 3, and Men in Black.

“At ILM I had the chance to learn from many talented people, but I knew I had to find my own path. Through opportunity and circumstance I taught myself how to design and build models on the computer. I had incredible mentors who were all huge innovators in their field and helped me every step of the way. They allowed me to push beyond my comfort zone. I try to pay that forward whenever someone comes to me for help or advice.”

In 2002, he left ILM and moved to Los Angeles. “By that time, I was designing sets on the computer, but had only worked in visual effects. I had no sense of what I was going to do next when an art director I had worked with recommended me to a production designer who was working on a Superman movie in Hollywood. There weren’t many folks working in the type of 3D design I had been doing. I was lucky enough to be hired as a set designer on that film.”

The movie was never made, but Aaron was able to join the set designers union and gained insight into where he wanted to take his career. About five years later, he began work as an art director, and contributed to films such as Dawn of the Planet of the Apes, Man of Steel, and Terminator Genisys. To date he has 45 feature film credits.

“Being a production designer is a very collaborative endeavor. There are hundreds of people who bring their talents and energy to a project. In the end, it’s a team sport.” As a way to explain it in a way people can relate, he describes his job as staging a huge wedding—every single day for months at a time. “There are hundreds of decisions to make each day. For example, if the script calls for a scene in a coffee shop, I have to ask what does the shop look like? How do we want to make the actors and the audience feel? How does the setting best tell the story, inspire it? My job is to be of service to the story.

“Every detail of a set has to be designed to make it realistic—every space, wall, color, piece of furniture, prop, graphic. We try to create a world that the actors can believe in. When they enter, they need to feel like they are their character.”

Aaron has a calm, easy going demeanor and I wondered how he handles the stress. “I’ve learned to ride the waves and not be engulfed by them. I have a high threshold for stress, until I don’t,” he laughed.

He loves his job, mainly because he never has to do the same thing twice. With each project he needs to build a team of dozens from scratch. “It used to be one could have a career in film and live and work in Los Angeles. These days, films are made all over the world. We don’t have the luxury of working with the same folks again and again. This has its advantages and disadvantages. To be successful, I have to be a manager and psychologist, put together large budgets and schedules, know how to collaborate with large construction departments, how paint affects the mood of a setting, and how to play politics with studios and producers.”

In 2006, while in New Orleans working on The Curious Case of Benjamin Button, a film about a man who ages backwards, Aaron met his wife Bridget. “A coworker and I were looking for a specific restaurant and got lost. We decided to walk into the nearest place that looked interesting. While we were eating, I felt a tap on my shoulder. A stranger asked, ‘Excuse me but my friend and I were trying to think the name of Mork and Mindy’s son, the one who was born an old man, because we decided she was born an old soul and is aging backwards. You look like someone who might know.’ I’d never met this woman. She didn’t know the film I was working on.

“Intrigued, I followed her back to their table to meet her friend. It really was one of those magical moments you hear about—love at first sight. We chatted for a while, but I never even got her name. They did tell me she was going to be at the farmer’s market the following day. So the next morning I got on my bike and rode to find this market. I had ridden less than two blocks when I turned a corner ran into her. She walked right up and said ‘Hi, I’m Bridget’. And basically that was that.”

For about ten years they split their time between New Orleans and LA. With her background in public health, Bridget worked for the Annenberg Foundation in Los Angeles, a family foundation that provides funding for an array of environmental stewardship, social justice and animal welfare efforts. In New Orleans, she started an urban land trust to help preserve the city’s remaining green spaces as part of a comprehensive water strategy designed to mitigate land lost to a changing climate.

In 2011 while on working on a film in Vancouver B.C., their son August was born. Five years later, they welcomed son Nathaniel. Aaron also has a daughter, Bela, from a previous marriage who is about to wrap up her third year in college.

A few years ago, after more than a decade of working on films outside of Los Angeles, Aaron and Bridget decided to make the Mendocino Coast their home base. Since that time Bridget’s father has also moved here. Because Aaron’s job requires him to be on location for many months each year, they aren’t home fulltime. “I love being back and reconnecting with family and friends. We gather for potluck dinners whenever we can. My brother Mikael, sister Sarah and I are close. We get together and play music at open mic Mondays at The Golden West.”

He also loves the interconnections of people living in a small community. “Before returning home to the coast this last time, I was working in Turkey and started searching for a piano online at the Mendocino Coast Swap Shop. I found one, and made arrangements to pick it up when I returned. When I told my mom, amazingly she said the piano’s owner had been her boyfriend when they were in high school in Southern California before she met my dad. And that he was married to my step dad’s cousin! Serendipity is everywhere if you know where to look.”

When asked how the area has changed since his youth, Aaron said, “There’s no longer a mill. The noon whistle was such a big part of this town. Where we’re sitting used to be the department store Sea Fair and then Daly’s. Many of our family and friends worked in the mill and the woods. When I was very young, my grandmother worked the main gate at GP and I remember sitting on her lap and pushing the button to let trucks in.

“Of course I’m not saying we need a mill, but it’s difficult to build a robust tourist economy when you are as remote as we are. Our parents’ generation are retirement age. Many of their kids moved away and it’s hard to come back because there’s not much in the way of an economic heart. Maybe new technology will help change that. Maybe the mill land will be put to some fantastic use and help drive us forward. There are some wonderful things happening here. I’m proud of folks like my brother [Mikael] and Jessica [Morsell-Haye] who own the Golden West and are working hard to bring new energy back to town.”

Despite these changes, Aaron is happy to be home. “Coming from here gave me a solid root and a real sense of community. You develop a certain amount of flexibility and resilience when you grow up rural and without much money as many of us did here. Tolerance for others is supported when you’re not surrounded by a culture that points out differences in people.”

After generously giving me over two hours of his time, we stood to part ways. He was going across the street to drop in on his mom who owns Teamwork, a business started by his grandmother in 1978. This touched my heart. Aaron Haye is a lot of things—brilliant, talented, and busy. He’s also a kind and thoughtful homegrown boy who goes to visit his mom.

A couple shots from the Live Aid set that Aaron designed for Bohemian Rhapsody: 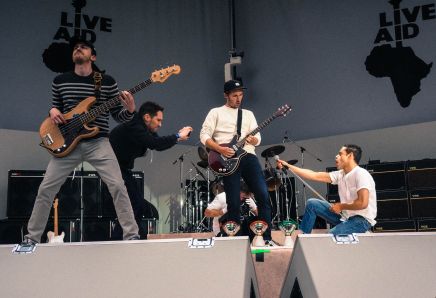