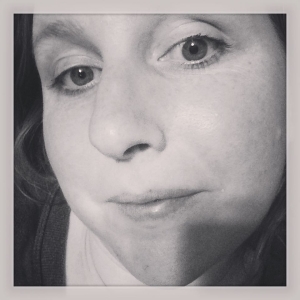 I sit next to Katie and pepper her with questions, marveling at how the shy girl I met 23 years ago has blossomed into a self-assured wife, mother and businesswoman. When she left Fort Bragg in 1998 to attend UC Santa Cruz, she never imagined she’d return eight years later to become a sock maven.

It was probably inevitable that Katie became an entrepreneur. During her early years, her father Dave Turner owned a waterbed business in the Bay Area. When these beds waned in popularity and the internet became more consumer-friendly, he began selling waterbed accessories online. He also designed and began to manufacture a layered latex mattress system called a FloBed. Both enterprises allowed him to work anywhere. He fondly remembered growing up in Fort Bragg and wanted to give his four children the same opportunity. In 1992, he moved the family to the area.

Katie’s dream was to be an artist. After graduating from college in 2002, she stayed in Santa Cruz, sold her paintings through local crafts fairs, and made rent money by working at the Sock and Shoe Company. In 2004, her then boyfriend Marshall Carr got a job with Enterprise Rental Car. They moved to Morgan Hill. She worked briefly as a merchandizer for Lowes. “I was miserable. It’s the only job I ever quit.”

She was hired as a manager for Socks Galore in Gilroy. A few months later, the Sock and Shoe Company wooed her back and trained her as a buyer. 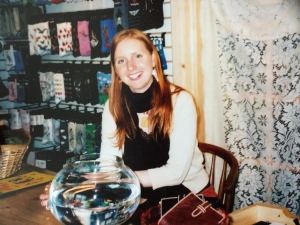 Katie in her original tiny shop.

By 2006, Katie and Marshall decided their future was limited by the high cost of living in the Santa Cruz area. They hatched a brilliant idea—move to Fort Bragg and open a sock shop. She consulted her dad, who wasn’t convinced it could be successful. He asked her to write a detailed business plan that included statistics on the number of tourists visiting the area and how much merchandise she’d have to sell in order to make a living. After reviewing the plan, he rented her a 200 square-foot space at the front of his FloBeds store on Redwood Avenue.

Katie brainstormed names—Sockadeedoda, Sockadelic—before choosing to honor a favorite childhood storybook character—Pippi Longstockings. The tiny shop was off the beaten tourist path, but located across the street from the dance studio. While mothers waited for their children, they’d wander in to buy socks. “It was my busiest time of the day and helped me develop a local following.”

Katie also garnered attention among street people who were enamored with her tiny shop. She fondly remembers a man named Chris who’d stop by frequently, always beginning his visits with “Hey Pippi!” She hasn’t seen him in years, but this nickname is still used by some of her customers. 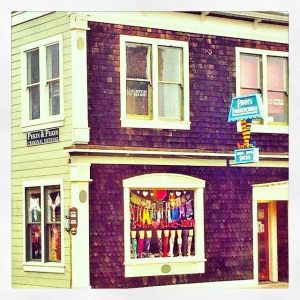 When a storefront on Laurel Street became available in June 2008, Katie moved Pippi’s, quadrupling her space and expanding her customer base. She was able to hire employees, which eased her workload and allowed her and now husband Marshall (a high school teacher) to start a family. They have two daughters—Rowan (seven) and Zoey (four).

“I’m so happy to be able to give my kids what I had—the freedom of a childhood in a small town. I want them to be able to play in the woods, on the beach or walk around downtown like I was able to, instead of hanging out in a mall.” 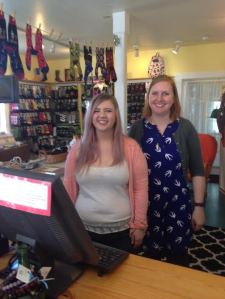 Katie has two employees. This author is especially fond of Rachel who is kind and patient. Whenever I’m in the shop babbling about something, she’ll smile and say in a soothing tone, “I understand.” She would make a great hostage negotiator or crazy person whisperer.

One of Katie’s favorite things about owning her business is the tourists who get excited to find a sock shop. “They literally squeal with delight.” Returning customers often show her the “Pippi’s socks” they’re wearing and ask to see the socks she has on.

Katie is grateful to live in a small town that has a big community feeling.  “I’m lucky to be a part of a place where one person can make a difference, where the opportunity to participate is just about everywhere. I love knowing my barista, the person who makes my lunch, and the people I support when I shop downtown. I also love that my customers know my family.”

When her dad Dave (the mayor) was the subject of a nasty recall effort last year, Katie wrote a heartfelt blog post defending him which sparked a movement in support of him.

Shortly after the demise of the recall, she joined forces with others to organize Go Fort Bragg, which encourages progressive involvement in the community. “Before this, I didn’t pay much attention to how the city was run. I voted for council members who shared my views and let them do their jobs. I’ve learned that these people aren’t mind readers. They need to hear the opinions of their constituents. I avoid anger and express my thoughts in positive ways. This gives them and others a chance to hear a point of view they may not have considered.” 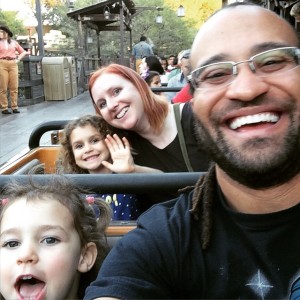 Katie acknowledges that Fort Bragg has changed since her youth. There was the music store, the old recreation center pool where she was a lifeguard, a tree at Bainbridge Park that was fun to climb. The tree is gone and many businesses have closed. “I can still hang out at Headlands Coffee House, but don’t sit on the sidewalk as much anymore.” She says this with a wink. “The mill is gone, tourism is a more integral part of our economy, but we still have the beach, the woods, and a great community that watches out for one another. We have the CV Starr Center, the coastal trails, and the Noyo Center. A lot of positive changes have enriched our lives.”

Another positive change is Katie’s return. She’s brightened our town with her optimistic attitude and charming sock shop. 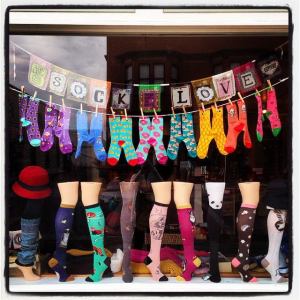 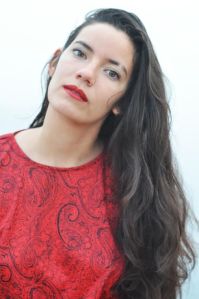 I met Virginia Loperena in typical small town fashion. Norma Watkins belongs to the Writers of the Mendocino Coast. Norma and I belong to the same writers group where we often talk of the quirkiness of Fort Bragg. Norma suggests I contact Virginia about a poem she wrote about our town and presented to the writers club.

In a roundabout way, I already know Virginia. She is linked to Jasper Henderson, a young man who went to school with my daughter. My daughter is friends with Virginia on Facebook.

I contact Virginia through Facebook and she is delighted to share her poem. I meet with her the day before she is scheduled to leave Fort Bragg for an adventure that will start by returning to her hometown of Coney Island, New York.

Virginia went to Harvard where, among other things, she met Jasper. After graduation, they ventured to Anchor Bay where his father lives. A few months later, they decided that area was too isolated and moved to Fort Bragg. In her two years here, she worked as the Marketing and Development Director of the Noyo Food Forest and as an Administrative Assistant and Data Base Manager for the Cancer Resource Centers of Mendocino County.

It took time for her to adjust to life on the Mendocino Coast. “I was surprised that so many people know one another. When I was out with Jasper, he’d always run into someone he knew. At first, I’d stand aside, feeling like a Martian envoy. But it didn’t take long before I became known. I like going to places like Headlands and running into people I know.”

Virginia loves the natural beauty of the area and the preponderance of what she calls “Hippy Stuff”—organic food, Fair Trade, non-GMO food. She recognizes that we’re a passionate community. People rally for protection of the ocean and the whales, and rail against devastating forestry practices. “People having a pet cause makes for an engaged community.”

Virginia also found things that she doesn’t like about living on the Mendocino Coast. It’s very isolated—at least three hours from the bustling urban city of San Francisco. She is also disheartened by the recent rise of a small vocal group of negative people. “They can sap the energy and joy out of living here. In a large city, these voices are like white noise. Here they’re hard to drown out. The rumor mill can quickly get out of hand. It’s not based on fact and becomes a scary thing for those who are targets of rumors.”

I wish Virginia well in her future endeavors and thank her for her contributions to our community and, of course, my blog.

Ode to Fort Bragg in Autumn
By Virginia Loperena
It’s six-thirty and the world has ended.
No, really. The sky has darkened to
Black, like ink, or strong coffee.
Speaking of coffee, at the coffeeshop
(We’re taking Headlands)
They play live music nightly.
The waiting list is a moon’s turn.
The moon is not risen
But will be a waxing gibbous
Tonight. The artist is a local man
Who plays jazz while I drink
Local! Port! Wine!
O, Fort Bragg, land of Laurel Street,
Of Locavores,
Of loquacious signage!
Tonight, the musician will begin his set at seven.
The sun begun its set
Over an hour ago.
We patrons are all tired and reading books.
Talking local politics,
A character we call Karl Marx discusses
A local County Supervisor
“He’s a phony. A phony!
Gladhanding around town,
Calling himself an Avatar.”
The coffeeshop, at this hour,
In this month
(November, just past Daylight
Savings, when the cold begins to set in,
But the leaves and rain remain
Indifferent to the season’s turn),
Is dead.
The night is so black.
Who would take their coffee
Or their reasonably priced port
At this dark hour?
There are no tourists left
To marvel at this quaint coastal town,
And gawk at the glassy beaches,
And kick back trendy microbrew.
Even the locals evaporate
Burnt out like afternoon fog.
My lover, a poet, says,
“They’ve all gone home
To put their animals away.”
O, Fort Bragg!
This lunacy, this love affair
Is delicious. O Karl Marx!
The universe is, indeed, “full of things.”
I do believe in gravity, in energy fields,
In the consciousness of Redwoods.
I believe,
In syncing my menstrual cycle with the moon-mother!
I believe,
In Mercury, in retrograde,
In November,
In the magick of this early falling night. 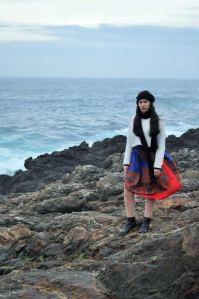