For twenty-two years, we’ve lived next door to the Mendocino Coast’s only mortuary. We’re often asked, “Doesn’t it bother you?” No, it does not. (Read my guest blog post “Neighbors.”)

In addition to the mortuary business, there are two apartments on the property—the one directly above the main building is rented to a full-time tenant; the other, above the alley garage, is unoccupied.

In recent years, the owners allow friends to occasionally stay in the vacant apartment. If they rented it for money, it could get listed on Yelp and subject to reviews, which might pose a problem.

My husband Gary is in the habit of waking early. I know the term “early” is open to interpretation. To some people, 6:00 a.m. is early, to others eight. I think we can all agree that three or four o’clock in the morning is damned early. By the time I get going—usually five-thirty or six, Gary is in mid-morning mode and delighted to have company.

I enter the kitchen to, “Good morning! How are ya?”

I groan, stumble to the coffeemaker, pour a cup and search out the nearest dark space.

Our dog Lucy is a slow riser, but usually ready to go outside by six-thirty. Today, she announces to the world that she does not like the vehicle parked in the normally empty space across the alley. Gary yells at her to stop barking while he carries a container to the alley and dumps cans and glass into the large recycle bin.

I pour a second cup of coffee and sigh.

Overall, the apartment above the mortuary garage is a great place to stay. It’s within walking distance to downtown and a short drive to the beach. It’s quiet on the east side, but not so much on the west.

If it was subject to Yelp reviews, I imagine they would read like this:

This is a wonderful place except for the cat that clawed at the front door in an apparent effort to seek asylum. We believe he’s demonic. We will never stay here again. Laine R., Oakland CA

We were awakened at daybreak by what we thought was a homeless meth addict flinging things while hollering in the alley. Trembling with fear, we peeked around the curtains to find the man next door dumping cans and glass into the recycle bin and yelling at someone named Lucy. We will never stay here again. Kasi H., San Francisco CA

We found the apartment well-appointed and roomy. But as we moved our luggage from the car, an albino animal with a brown patch over one eye barked incessantly from the house across the alley. Efforts to ignore it only made the howling louder. As we approached the gate to get a better look, it let out a puddle of pee and rolled in it. Each time we went to or left our car, the creature yowled. We will never stay here again. Jenn H., Kirkland, WA

When we arrived at nine o’clock at night, all was quiet and peaceful. Little did we know this was because the inhabitants across the alley were asleep. At the crack of dawn, we were startled awake by the baying of a Louisiana Catahoula Leopard Dog and a man yelling, “Leave Little Mister alone!” What kind of freaks are these people? We will never stay here again. H. Riley, San Francisco CA 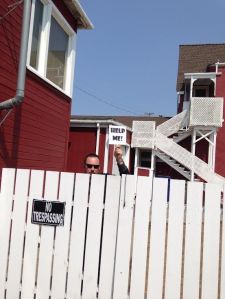 Kris S. (who refused to disclose the identity of his city)

Over the past month, I’ve begun to obsess on whether Lucy might be considered a genetically modified organism. GMO’s are illegal in Mendocino County. We could be breaking the law by harboring her.
Fun Fact: On March 2, 2004, Mendocino County became the first jurisdiction in the United States to ban the “cultivation, production or distribution of genetically modified organisms.” 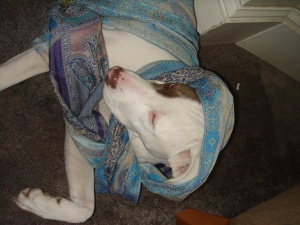 People here take this GMO stuff very seriously. I once saw a man outside Safeway dressed as a tree with vegetables hanging from his limbs and a sign across his trunk that declared GMO’s ARE BAD. In order to avoid confrontation with people dressed as vegetable trees, Lucy would have to be disguised as an old Finnish woman on our daily walks. 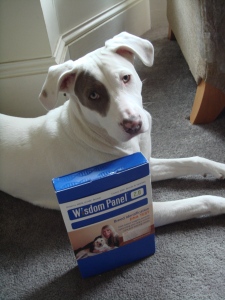 After I expressed my concern to our son Harrison, he sent us a Wisdom Panel 2.0—a breed identification DNA test. Who knew such a thing existed? The packaging offers “DNA-based insights towards optimizing your dog’s overall care and training needs.”
I’ve always believed the care of dogs was fairly basic: feed, bathe, brush, exercise, and take to obedience classes so you can earn a certificate to legitimately boss them around. Will the results of Lucy’s DNA test cause me to rethink this routine? She might prove to be such a sensitive combination of breeds that we’ll have to learn how to punish—I mean “correct”—her without screaming when she chews the ends off and rips the stuffing out of sofa pillows.
The Wisdom Panel 2.0 also claims that it “covers 200+ breeds and varieties.” What if it turns out that Lucy is a genetically modified combination of all 200 of them? Will she get a prize? Like a million dollars?
The kit contains two white swabs that look like pipe cleaners on the end of six-inch plastic wands. The instructions say to “firmly roll the swab’s bristles between the inner surface of the cheek and gums for about 15 seconds. Repeat with second swab.”
I imagined Gary and I would be about as successful at getting Lucy to refrain from eating the swabs as we are at getting her to stop eating pillows or digging tunnels in the yard. (She’s up to something spectacular out there—we’re hoping it’s part of a complex re-landscaping effort.) 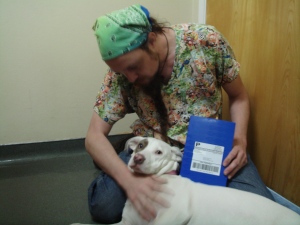 I made an appointment with our vet. Lucy let Phil, the Zen-like vet assistant, swab the inside of her cheek without incident. He helped repackage the swabs and I dropped them in the mail.
Three weeks later, we got the results.
Lucy appears to be a conglomeration of Australian Shepard, Miniature Poodle, Cairn Terrier, Wirehaired Pointing Griffon and Labrador Retriever. Oh, and a thing called a Catahoula Leopard Dog.
My daughter Laine remarked, “You said you wanted a poodle, now you’ve got one.”
None of these breeds make any sense whatsoever. What kind of mutant creature do we own? (It’s suddenly clear why GMO’s are outlawed in Mendocino County.)
And what the hell is a Catahoula Leopard Dog? 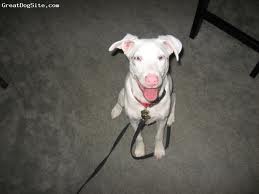 Bingo!
Not only does Lucy look like a Catahoula Leopard Dog, she shares many of the same characteristics: oddly piercing “glass eyes” in vivid shades of light blue or goldish-brown, a fierce independence that sometimes borders on being standoffish, bouts of stubbornness, and domineering of other pets.
Fun Facts: In 1979, the Catahoula Leopard Dog became the official state dog of Louisiana; hence, its name was changed to Louisiana Catahoula Leopard Dog. Louisiana Governor Earl K. Long (1895-1960)—an eccentric politician whose wife had him removed from office and placed in a mental institution until his legal advisor sprang him and put him back in office—was partial to the Catahoula breed and collected them.
Long’s devotion to the breed is memorialized in an annual competition known as Uncle Earl’s Hog Dog Trials. These trials are held during the third week of March (dang, we just missed them!) in Winnfield, Louisiana and involve boars, Catahoula Leopard Dogs and another exotic breed called the Blackmouth Cur. This event regularly draws a crowd of 5,000 with people traveling from Canada, England and across the United States.
According to Wikipedia, “…dogs are judged on their containment and control of the boar and their style of baying. If a boar runs from the dogs, they may nip the boar to make him stop, however ‘catching’ the stock is prohibited.”
Now that I’m aware of Lucy’s heritage, I’m obligated to train her for next year’s Hog Dog Trials. I’ll need a boar. Please let me know if you have one I can borrow. In the meantime, I can substitute our cat Little Mister. 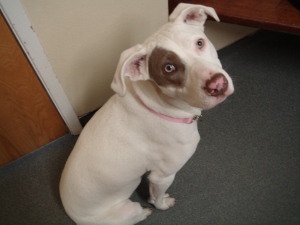 I’ve learned that GMOs are considered to be any organism with DNA that has been modified by human intervention. Given the number of dog breeds found in Lucy, her DNA was modified by generations of human non-intervention. She’s relieved to no longer pretend to be an old Finnish woman.