i sent this to The fort bragg advocate-news where it appeared in the july 23 edition. the publisher gave permission to reprint it.

Recent talk about changing the name of Fort Bragg, California, made me curious about my town’s namesake. For years, I’d assumed that Confederate General Braxton Bragg had a hand in setting up the fort. But that’s not true—he never stepped foot in Northern California. Furthermore, the place was given its name four years before Bragg served in the Confederate Army.

In the summer of 1857, First Lieutenant Horatio Gibson was dispatched to the California hinterlands to build a military post near the Noyo River. Ten years earlier, Braxton Bragg had been his commanding officer in the Mexican War. Horatio was one of the few soldiers who claimed to admire him.

I’d like to offer an opposing theory for how our town got the name. Before global warming, the weather was not kind to the Mendocino Coast. For decades, residents had to choose which weather pattern—fog, rain or wind—they hated the least.

I imagine Horatio and his crew struggling to build shelters with subpar tools. When the winter rains began, someone probably said, “Hey, why don’t we name this Godforsaken place after that nut ball Braxton Bragg?”

Despite growing up in a poor family, Bragg attended West Point and finished fifth in a class of 50 cadets. In 1856, after nearly 20 years of military service, he retired to farm his Louisiana sugar plantation. Shortly before retirement, he was given two crappy assignments—Fort Gibson in Oklahoma Indian territory and Fort Washita near the Texas border. This may have been the Army’s way of “encouraging” him to retire.

In his early years, Braxton proved to be a brave soldier, saving the life of future Confederate President Jefferson Davis in the Mexican War. Over time, his behavior became increasingly kooky.

Ulysses S. Grant wrote that Bragg had an obsessive need for proper procedure that bordered on mental illness. At one time, Bragg had been both a company commander and quartermaster (the officer in charge of approving the disbursement of provisions).

As company commander, Bragg made a request to the company quartermaster— himself—for something he wanted.

As quartermaster, he wrote an official reason for denying it.

As company commander, he argued that he was entitled to it.

As quartermaster, he continued to persist in denying himself what he needed.

Bragg finally requested the intervention of the post commander who said, “My God, Mr. Bragg, you have quarreled with every officer in the army, and now you are quarreling with yourself.”

Initially, Bragg opposed the idea of secession. However, when civil war became imminent he emerged from retirement and returned to the military in 1861. His years away had not improved his mental state. His men were often mystified by his orders on the battlefield. He would command reckless, aggressive offensive attacks or become bizarrely hesitant to move forward, sometimes in the same battle. 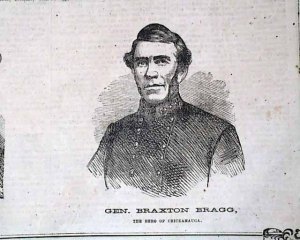 After a victory at Chickamauga, Bragg passed up a chance to thrash Union forces by letting them retreat to Chattanooga, Tennessee. After this debacle, Confederate Cavalry General Nathan Forrest said to him: “You have played the part of a damned scoundrel, and are a coward, and if you were any part of a man I would slap your jaws and force you to resent it. You may as well not issue any orders to me, for I will not obey them. I say to you that if you ever again try to interfere with me or cross my path it will be at the peril of your life.”

Bragg’s subordinates threatened mutiny and called upon President Davis to remove him. But Davis stood by the man who had once saved his life and, instead, transferred the generals under Bragg’s command.

After the Civil War, Bragg returned to Louisiana to find that the Union Army had seized his plantation. He eventually found work as the superintendent of the New Orleans Waterworks and then as chief engineer of Alabama. He moved to Texas in 1874 to become the chief engineer of the Gulf, Colorado and Santa Fe Railroad and later served as the chief railroad inspector for the state.

Bragg died in Galveston, Texas, on August 27, 1876 while walking down the street with a friend.

Given Braxton’s history, it’s hard to imagine any place named after him, let alone four. In addition to our little town, the Army base in Fayetteville, North Carolina, and a ghost town in Hardin County Texas share his name. There’s also a company in Knoxville, Tennessee, called Braxton-Bragg, which specializes in “Tools for Granite, Marble, Tile, Polished Concrete & Stone Restoration.”

California State Senator Steve Glazer claims the name of our town pays tribute to the Confederacy and has introduced SB 539 to persuade us to change it. This is absurd. Braxton Bragg was an inept Confederate and holds the distinction of being one of the most hated military men of all time. Our town’s name does not honor him. Over the last century and a half, the name Fort Bragg honors the generations of people who lived, worked and died here. It belongs to us and we aim to keep it. 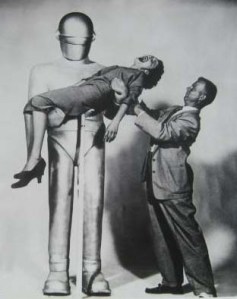 Two weeks ago, all internet and a lot of telephone service along the Mendocino Coast was interrupted when an auto accident on Comptche-Ukiah Road resulted in a pole struck and slammed to the ground. Apparently that pole supported a bunch of microwave ovens—or whatever it is that allows us to electronically connect with the greater world.

Twenty miles away on that Sunday evening, the scene in this house was reminiscent of clips from the 1971 movie “The Panic in Needle Park.”

I hate to admit it, but my husband Gary and I feel we have a God-given right to trouble-free internet access. (I was once told you’re only as sick as your secrets—so there you have it.) In fits of rage, we unplugged the modem, plugged it in, cursed the red light, and called friends to ask if they had service. Oddly, everyone’s phone was busy.

A radio broadcast revealed what had happened and sparked some very serious questions: Who was the driver of the car? Was he drunk? He must have been drunk. I’ll bet he was drunk.

Why are the various contraptions that provide internet, cell phone and bundled services (internet/television/cell and landline phones) on one measly pole? I suggest three poles: one for this, one for that, and one for this and that. Doesn’t this make far more sense than having everything attached to something that can be toppled and freak out an entire community of internet addicts?

After I learned that the services that connect us to the outside world are actually provided through a fancy cable, I had more questions: Why can’t the cable be buried like in civilized communities? Why must it hang from a series of polls that subject it to the perils of wind, storms and careless drivers? Why does AT&T hate us?

Each time I pay my landline phone bill, I grumble at forking out money for something I rarely use. Now I’m grateful. Unlike many who were knocked out of all communication, my landline continued to function. But it was useless for calling my bundled-service friends and it couldn’t access Facebook.

Without use of the internet, my business came to a grinding halt. (Despite the millions I make from writing this blog, it is not enough to support my lavish lifestyle.) On Monday morning, I was unable to follow the financial markets and check on the latest charitable works of the Kardashians. I was forced to file stacks of paperwork, clear off my desk, and vacuum my office. I plucked my eyebrows, waxed my mustache, and painted a spare bedroom.

It was only ten o’clock.

I went downtown to soothe myself with a treat from the fabulous French bakery, A Sweet Affair. Thank goodness her ovens had not been affected. I went to Feet First to buy a pair of running shoes. I’d once read that runners should refresh their shoes every so many miles. I figured I’d finally fallen into the so many miles category. I put them on and ran home to eat my pastries.

By Tuesday, I wished I’d purchased more than one cupcake (okay, I’d bought two) to sustain me through the bleak hours ahead. (A Sweet Affair is closed on Tuesdays.)

I went downtown, stood on the corner of Laurel and Franklin Streets, and hollered that I had a working landline at my house for rent at $50 per call. Before I even closed one deal, I was arrested. The cop let me go after I allowed him to use the phone for free.

That afternoon, I studied Lucy and wondered what she would look like with eyebrows. Despite my efforts to conceal the eyebrow pencil, she spotted it and ran into my office. I noticed the red light on the modem was gone. After 48 hours it must have burned out.

I turned on my computer and clicked the icon thingy that gets me on the internet and—thank the powers that be—I was one with the world once again. I spent hours checking email, Facebook, and—believe it or not—even Twitter.

And the Kardashians? After each was fitted with a designer wardrobe, they flew to Israel to negotiate a successful peace agreement with Palestine. Afterwards, they were spotted at Fashion Week in Tel Aviv.