If you’re walking east along the 200 block of Redwood Avenue, you’ll notice a difference in the Larry Spring Museum. The storefront, once a bizarre display of things like rocks that resemble food—ham, peas, and yes, even cauliflower—has become more polished, evolving to reflect the unique man who created it.

Part of this renaissance is due to the opening of the vintage shop Lost Coast Found, housed in the same location and owned by Megan Caron—a homegrown girl who returned after living in Petaluma for 16 years. “When Larry died [in 2009], he left the building to Heather Brown, a well-known Canadian artist,” said Megan. “In exchange for reasonable rent, I help out with the museum.

“I’ve always loved rocks and all things wood and was in awe of this secret little museum full of rocks, wood, creativity and character. I was excited not only about finding a storefront, but also the prospect of helping the world meet Larry Spring. He was a proponent of solar energy back when the technology barely existed. My husband’s career has been in the solar industry.” 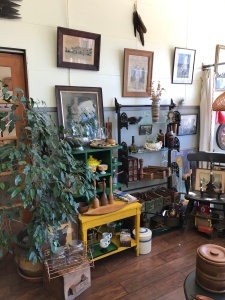 When Megan speaks of something she’s passionate about—her store, the museum, kids spending too much time on screens, or the lack of housing on the coast—her hazel eyes blaze. She’s articulate and quick to laugh, flashing a sly look whenever she makes fun of something or herself. As I listen, I understand why Fort Bragg once had a hard time holding onto her intense energy.

On her father’s side, Megan hails from the Caron family. “My grandmother grew up in Finland and immigrated to Canada. Winnipeg was too cold for her. Like many Finns at the time, she ended up in Fort Bragg. In the late fifties, she started the first licensed beauty salon on the coast—Kirsty’s Kut and Kurl. She hoped I’d take over the business. I worked as a receptionist for a while, but I’m not good at making people look beautiful.” She laughed.

By 1993, Megan felt stifled by Fort Bragg and was eager to leave. “Imagine feeling stifled by beautiful redwood forests and the ocean.” She laughs. “I moved to Eureka and enrolled in classes at College of the Redwoods, but didn’t always attend. While working as a route driver for Figureidos, I spent most days driving around and admiring the old architecture.”

She returned briefly to Fort Bragg in 1994. “I worked as a front desk person at Vista Manor. I’d been cleaning rooms there during the summers since I was 14 years old. I had some friends who were moving to Chico and needed a roommate, so I moved and enrolled in Butte Community College. I took classes in interior design because it meant I could tour other people’s homes. I’ve always been interested in how people create their space. I spent a good portion of my childhood rearranging my room. My walls were giant collages of pictures and posters.”

In Chico, she worked as a caregiver. “One of my favorite clients was an elderly Texas Belle. Her bedroom was like a Hollywood set. Everything was red and gold—red velvet walls, gold furniture, gold bedspread, everything. She wanted to get rid of some ‘evidence’ before she died—massive amounts of lingerie she’d acquired over the years. She gave me garbage bags full to take to a thrift store.”

Megan was a kid, intimidated by the contents of the bags and the thought of delivering them. “I drove around for weeks with elderly contraband in the trunk of my car, hoping no one would find it.”

When she finally mustered the courage to enter a store with the donations, she spotted a jacket. “I thought it looked cool and bought it. That started my interest in vintage and collecting. From then on, I stopped going to new clothing stores. I don’t want to support industries that make inferior products overseas. Except for technology and a few other things, I rarely buy anything new.”

By 1997, Megan decided college wasn’t for her, moved back to the coast and the hospitality industry. Through friends, she met Ben Tuke who would eventually become her husband. “He grew up in Mendocino. Like me, he couldn’t wait to ‘get out of Dodge.’”

In 2000, tired of small town living and looking for adventure, 24-year old Megan and Ben tossed everything they owned into the back of Ben’s pickup and headed south. “As we approached Petaluma, Ben asked if I’d ever been there. I only knew it had an outlet mall. My requirement for where we lived was that the downtown have a bakery, record store, and bookstore. Petaluma had it all, including great architecture. We signed a lease on an apartment that day.”

Ben went to work for Sun Power Geothermal, a startup solar company. “We knew solar was the wave of the future. He started as an installer and worked his way up to quality manager.”

Megan got a job in the magazine department of Copperfield’s Books. “Growing up, my grandmother Julia Tidwell and my parents supplied me with books. My dad is a book collector and indulged me at bookstores. When I saw the help wanted ad for Copperfield’s, I ran down there with my non-impressive resume and got the job.” She later found out she was hired because they were impressed by her answer to the question of who are her favorite authors—Richard Brautigan and Tom Robbins. 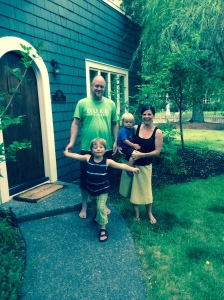 Over the next 16 years, Megan and Ben settled into life in Petaluma. They bought a house and had two sons—Addison (9) and Arias (5). “As the boys grew older, I became uneasy about raising them in a suburban environment where there’s a disconnect with nature. I drove 15 minutes just to go to the park. I regularly took them to Fort Bragg where they could play in the forest and we could be at the beach within five minutes. They seemed happiest in the wild.

“In Petaluma, everything is neat and tidy. The downtown slowly became gentrified, pushing out the interesting eccentric folk and funky taquerias. It was harder for me to engage with people. How many nail salons and upscale restaurants can you have in one place? I yearned for the funky places where there are things that need to get done. In Fort Bragg, we have blemishes and unconventional people. I wanted to raise our boys here amongst the salt.”

Megan’s years of working in a bookstore gave her a good understanding of the many facets of retail—ordering merchandise, arranging floor space and in-store displays. “All six window displays had to be changed regularly. I was always thinking of themes and digging through basements, dumpsters and estate sales for props.” Copperfield’s customers often asked to buy items in the windows.

“For two years, Ben and I talked about moving back to Fort Bragg. I thought the town needed a vintage shop that sold useful as well as decorative items. After years of my picking and hunting, our garage was full and retail space became a must.”

During that time, Megan looked for a storefront in Fort Bragg. In November 2016, she was walking by the Larry Spring Museum and saw a slip of paper with Heather Brown’s phone number written on it. “I called and within twenty minutes, I had the keys.”

Ben went to work for Nextracker, a solar tracking manufacturer, which enables him to work remotely. They sold their house in the spring of this year and bought a house in Fort Bragg. In June, Megan opened her store.

“I’ve met countless young people, some with young families and existing businesses who want to live here and invest in our community, but they can’t find a place to live. We need people to move here. There’s so much to be done and I feel we’re running out of people to do it. Without a push for housing projects, we will never have a sustainable economy.”

I’m grateful to Megan for returning with her family. She will use the energy that once drove her away to improve our community while preserving its charm.

Here’s a little preview of the Larry Spring Museum. Give it a visit. You’ll be glad you did. 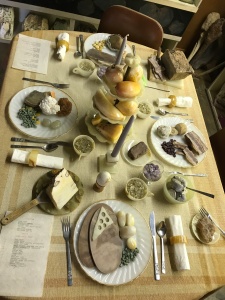 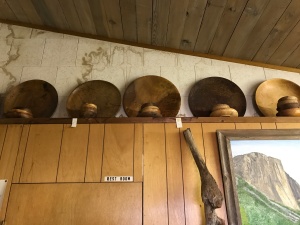