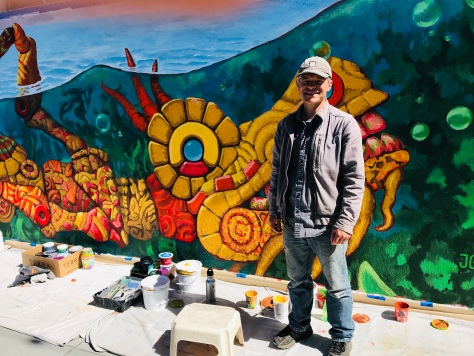 Over the past couple of years, I’ve delighted in the murals popping up on buildings around town.

They enrich our area by giving it a sense of playfulness and showcasing the talents of amazing artists. This past summer, I saw a terrific one being painted on a building across from Bainbridge Park. I stopped to admire it and chat with the artist, Jason Godeke. His friendliness and warmth, coupled with the enjoyment he seemed to be having, prompted me to invite him for an interview.

Jason was born in St. Louis, Missouri in 1967. In the early seventies, his parents abandoned their teaching careers and moved to Mendocino. His dad became a lawyer and his mom was the director of the Mendocino Art Center for many years.

As a youngster, Jason didn’t consider himself an artist, even though he did a lot of doodling. An exchange student experience in 1984 changed that perception.

“When I was a sophomore, I heard an exchange student speak at Cotton Auditorium and it sparked my desire to go to another country. It was during a time when I felt I’d become too complacent and needed to shake things up. The following school year, I went to Holland.” 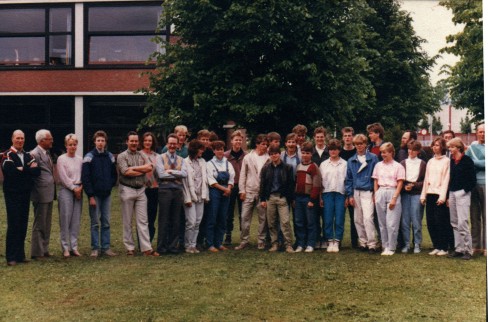 Jason was unprepared to be thrust into a different culture. “It was hard at first—dark and hard.” This was back in a day where communication systems were archaic compared to what they are now. International telephone calls were prohibitively expensive and it took a month to receive a letter, all adding to his feelings of isolation.

“While learning the language, I spoke like a five-year old until I got proficient. This gave me humility and permission to be silly, to take myself less seriously. One way I tried to express myself was through drawing. I learned a lot about art, which is highly celebrated in that county. In addition to all the other museums, the Dutch have two Van Gogh museums. The experience turned out to be great and changed my life.”

Back home for his senior year in high school, his mom suggested he consider going to college in the East. “Without my experience in Holland, I might not have considered going so far away from home.” In the fall of 1986, he entered Yale where he majored in art. While there, he volunteered in a high school art class. “That’s where the teaching bug got me. I knew I didn’t want to try to make a living as an artist.”

After college, Jason moved to San Francisco where he was hired by the de Young Museum to teach art in the schools. “I felt lucky to get this job right out of college.” He also became the Arts Administrator for the Marin Arts Council, a job he held for seven years. All the while he continued to make his own art.

During this time, he married Cristina Mathews. “I’d met her twice while we were in college. A friend brought her to my New Haven apartment to watch a Yale student singing group sing the National Anthem at an Oakland A’s ballgame on my four-inch black and white television set.” He laughed at the memory. They met again in 1994 in Oakland, when a mutual friend, Lisa Allen (who Jason knew from high school), asked him to give Cristina a ride to a party. Cristina was living in the East Bay, tutoring and working at a pizza restaurant.

By 1997, Jason and Cristina were off to Long Island, New York with their baby boy so Jason could attend Stony Brook University’s MFA program. Cristina eventually entered and completed a PhD program in comparative literature.

After graduation in 2003, they moved to Bloomsburg, Pennsylvania, where Cristina had accepted an English professorship at the university. A year later, Jason was hired as an art professor. “We liked the small town life. Cristina became very involved in the community, especially with the Shade Tree Commission where she helped plant about 170 trees.”

A little over a decade later, they began thinking about the next chapter in their lives. “Cristina was tapped out on college teaching, and our son had moved to Mendocino County. I’d become a little too comfortable as a college teacher and was also ready for a change.”

Cristina applied to and got accepted to law school at UC Berkeley. Jason began teaching art at Fort Bragg Middle School. Cristina graduated in May of this year, and took the bar exam in July. He recently began his third year at the middle school.

Jason empathizes with the emotional struggles of this age group. It takes him back to his time as an exchange student where he felt alone and isolated. Middle school kids are forging new territory and he feels an obligation to help guide them.

“Teaching middle school students has revived teaching for me. It’s demanding of my resources and is making me a better teacher. It’s a daily challenge to make sure they’re learning and to find ways to cultivate their creativity. 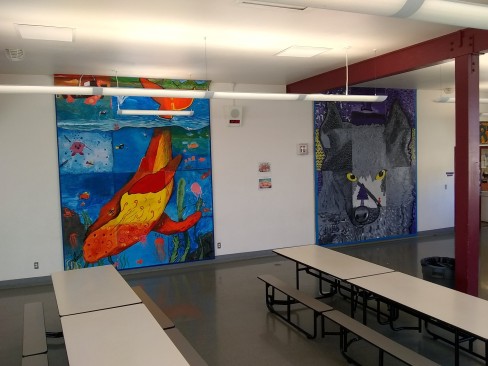 “I strive to get students to engage in serious play, to let their minds wander, yet have discipline. Some may be struggling with other subjects and art offers them an opportunity to expressive themselves, to experience real accomplishments. I tell them, and show them, that there are many different ways to succeed with art. Part of that success is in finding surprises. I ask them to surprise me.”

At the end of weekdays that begin with being at school by 6:30-7:00, Jason doesn’t have much time or energy to devote to his own artistic expression. He finds this time during school breaks. In 2018, he learned of the Alleyway Art Project and submitted a portfolio to Lia Wilson. Later in the year, Jason decided to create four possible mural designs that would work with another existing mural on the side of a building at 400 E. Laurel Street across from Bainbridge Park. Lia took Jason’s designs to  the building’s owners—Les Cizek and Clay Craig—who had commissioned the other mural in 2017. They agreed to a second. Lia and Flockworks—the local arts organization that sponsors the Alleway Art Project—found funding for it, and got approval from the City of Fort Bragg.

Over the three weeks of creating the mural, Jason had many onlookers. “A van load of folks would show up to eat lunch in the park and they’d sometimes watch the painting. Artists, families going to the library, and some of my students stopped by. The process let people feel involved and allowed me to be a viewer of the project. Some people showed up every day. It felt like performing art where I got to interact with an audience.” The result is a fantastical creature Jason calls “Sub Rosa”—an Aztec Teotihuacan-inspired design that incorporates the richness of the Dutch painters.

Jason feels lucky to have been able to return to the Mendocino Coast. He loves being near the ocean and the abundance of trees. He enjoys the opportunity to interact with kids on a daily basis. He likes living in the town where his dad has worked for decades as an attorney and to be able to drop by his office for a visit. He gave a warm, contented smile as he said, “When I was growing up in Mendocino, I rarely spent time in Fort Bragg. Now I rarely leave.” 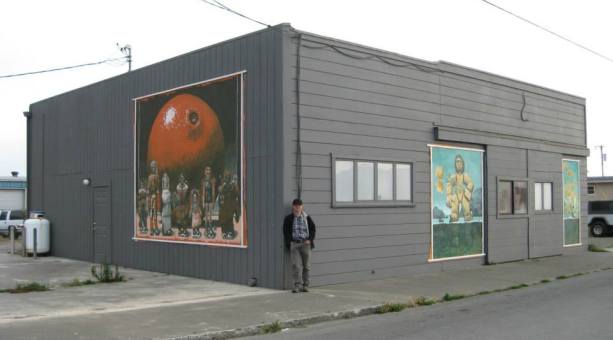