Sheila was raised on an organic farm in Fort Bragg and learned to make soaps, facial scrubs, and lip balms. She never imagined this knowledge would allow her to earn a living. As so often happens in life, one thing led to another and here she is—the owner of Bella Mia, a petite treasure tucked into the back room of Understuff on Main Street.

Born in 1976, Sheila grew up with a large extended family on the same property where her mother was raised. In addition to farming, her dad was a woodworker. “My family was self-sufficient. The attitude was if you want to do something, just do it. There were few limitations.”

Her mother had a passion for growing the unusual—like kohlrabi and currants. “In the early eighties these were novelties. Margaret Fox and Chris Kump (then owners of Café Beaujolais) were on the culinary edge and used uncommon ingredients in their dishes. Whenever I’d go on a delivery with my mom, Margaret would feed us something yummy.”

The effervescent Sheila welcomes visitors to her beautiful store.

Sheila’s formal education was a mixture of private, public and home schooling. “For a while I went to a Hippie school where no outdoor shoes were allowed inside. We had to change into Chinese slippers, and call teachers by their first names.” As a teenager in the early nineties, she wanted to go to “normal” school and wear designer jeans. She went to Mendocino High for a year before enrolling herself in Fort Bragg High. “They asked, ‘Where are your parents?’ I said, ‘Why do they need to be here?’” She laughs. “I was taught to take charge of things on my own. I never asked them to come with me.”

After graduating from high school at age 16, Sheila drove to Washington State with a boyfriend and lived in Friday Harbor on San Juan Island.

She laughs. “My parents felt if that’s what I wanted, I should do it.”

After a year, the boyfriend and island living lost their appeal. She drove back to Fort Bragg.

Alone? At seventeen? Before cell phones?

She laughs. “I never felt unsafe. There were plenty of rest stops along Interstate 5 that were clean and well-lit at night. When I got tired, I’d pull into one and sleep in my car. At each stop, there was a group of women volunteers—I think they were nuns— who handed out cookies.”

After a year of waitressing, she worked for the Village Toy Store in Mendocino. “The owners, Bill and Susie Carr, changed my life. They encouraged me to have a career, taught me bookkeeping, and how to run a business. I started saving for retirement at the age of 18. I consider them family and we remain close.”

The toy store job sparked a love of working retail. After the Carr’s sold their business, Sheila worked for a number of stores. A job at Sallie Mac nudged her to open her own business. “She carried an exclusive line of skin care products from a French company that required all sales people to go through extensive training in order to present them properly. I learned a lot about how these are made and why certain ingredients are chosen.”

Sheila combined her knowledge of organic skin care products with that of aromatherapist friend Melanie Knox and made gifts for friends and family. They eventually expanded their operation to sell at craft fairs.

“Our first craft fair was the opening day of the 2008 Whale Festival—the one that had the worst weather ever on that Saturday morning. There was thunder, lightning, hail, and torrential rain. We set up in the Company Store and I worried we wouldn’t sell a thing. But we sold out in five hours and made $1,000. We were so excited.” 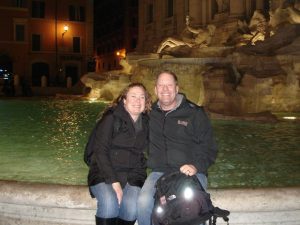 While traveling the craft fair circuit and working for her mother (who owned a nursery), Sheila contemplated opening a store. Her husband Michael wasn’t sure it could be successful. They’ve been married 10 years and come from very different backgrounds. “I have a sense of no limitations while he’s more conservative.”

They met at the Tip Top one night when she was the sober driver for a young friend’s twenty-first birthday. He lived in Sacramento, but his family had a house on the coast that he’d been visiting most of his life. “We dated for a year. On the Friday after Thanksgiving, exactly a year after we met, he proposed to me in the place we had our first kiss—his parents’ house on Todd’s Point.” He moved to Fort Bragg and works for North Coast Plumbing.

Drawing on the can-do spirit in which she was raised, Sheila spotted a “For Rent” sign on Laurel Street in 2012 and 15 days later opened Bella Mia.

In 2013 her mom was diagnosed with ALS and died two years later. Helping her mom through her illness and mourning her death took a tremendous emotional toll on Sheila. “Creativity and grieving don’t go hand in hand. I felt like I couldn’t make anything or go to my shop and make chit chat. I had lost my mom, so what else mattered? My lease was coming up in April of this year. I wanted to close the store. Hilary [White] had lost her father six months before my mom died and knew how I felt, but was concerned that I’d regret that decision. She had an empty room in the back of Understuff and convinced me to move in. I’m so grateful to her.” 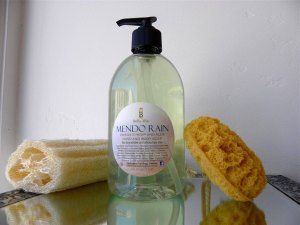 Like other business owners, Sheila works long hours, but enjoys being her own boss. “If I decide to do something, I do it. I don’t have to discuss it with anybody.” She makes her products daily. My personal favorite is her Mendo Rain soap. Imagine standing on the Mendocino Headlands on a crisp, clear morning after a storm. Take a deep breath. Sheila has captured this pure, clean aroma in her liquid soap. (If you live out of the area and can’t get to the headlands, order it and you’ll see what I mean.)

“I like the creative process of making things. I can be focused and completely present in the task—Zen.” This Zen quality is manifested in her store—it feels harmonious and, even though well stocked, has a minimalist feeling, allowing for a relaxed shopping experience. She’s proud that most of her customers are locals.

Sheila hopes someday Fort Bragg’s economy returns to a balance between business and tourism—where businesses are created to help young people stay here. In the meantime, she continues to do what she can to add to the economy while generously sharing her joyful spirit.