A year ago, my daughter Jenn suggested I submit a few of my blog posts to Chicken Soup for the Soul. I went to their website and found that they accepted entries in various categories. Without much hope, I submitted three stories about my dog Lucy.

In January, I must have also submitted the post, “The Spirit of Giving,” but truly don’t remember. I blame my lack of memory on the fact that I have a lot going on in January. First of all, I loathe the month: it’s dark, cold, and responsible for the death of the holiday season, which starts with Halloween and ends on New Year’s Day. Second, I’m extremely busy with my day job. The energy it takes to not hate January while fighting melancholy and working long hours leaves me little spare brain power.

Months went by. Spring miraculously returned to the Northern Hemisphere and morphed into summer. Life eased up and my January bitterness disappeared. In late July, I started receiving unsolicited emails from Chicken Soup for the Soul.

Ah ha! So that’s the deal. You submit something to this outfit and they put you on their junk mail list. Well I have a delete button and know how to use it. I deleted the email without reading it. A day or so later, I receive another. Delete! I wasn’t about to fall for their devious ploy.

A week later, my phone rang. I didn’t recognize the caller ID number and didn’t answer it. An hour or so went by and I retrieved my messages.

“This is D’ette Corona from Chicken Soup for the Soul. I’ve been trying to reach you through email. A piece you submitted is a finalist for our Christmas edition.”

I now know what it feels like to be hit with a stun gun.

I called D’ette back and confessed my stupid assumptions. She was sweet and understanding. “When people don’t respond to emails, I always call.”

After I filled out the form, mailed it, and my blood pressure returned to normal, I re-read her email. I was considered a finalist, not a shoe-in. Oh well. I braced myself against disappointment.

A few weeks later, I received notice that “The Spirit of Giving” had been chosen for publication. I would receive $200 plus ten free copies. I had to review and approve their edited version where they took some liberties and changed the title, but hey this is Chicken Soup for the Soul! They sell hundreds of thousands of copies. Rewrite everything for all I care. 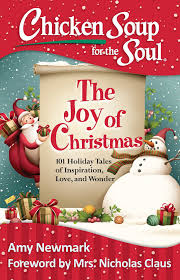 I was given the chance to buy 20 more books at cost and of course I took it.

On the fourth of October, I opened the front door to let the cat in and found a large box on the porch. Inside were—yes, you know—copies of the book. I flipped through to find my piece listed as number four out of 101 entries. I read it aloud to my husband Gary who was nearly as thrilled as I was.

I now have 30 copies of a book I never thought I’d be published in, from an offer I dismissed as junk mail. I will give them away, then sit back and wait for the requests for movie rights to start pouring in, hopefully in that darkest of months—January.